Jack learned his rowing at St Patricks at Ballarat and joined Mercantile in the early 1950s. He won two King’s Cup races in 1956 and 1958 and was reserve for the Olympic crews in 1956.

He remembers well the post war years where learned so much from the ex-serving members. Norm Cairnes who had been through so much at Toobruk and who played down any mention of it. Laurie Moll who took a soldier settlement block and Mercs members spent weekends there on working bees. He does not remember fondly marking lambs with Crockett! Jim Ferguson who would break into song with Gilbert and Sullivan arias. Sadly other rowers were unable to shake off the effects of war with his friend Paddy Barrett dying early.

He also remembers fondly the country regattas. In particular one Easter regatta in 1955 when Bob Aitken convinced them to race at Mildura in order to win the Club premiership from Albert Park. Herb Shears managed the group and they won the premiership.

He also remembers well the great times in the South West Corner with the old barrels. 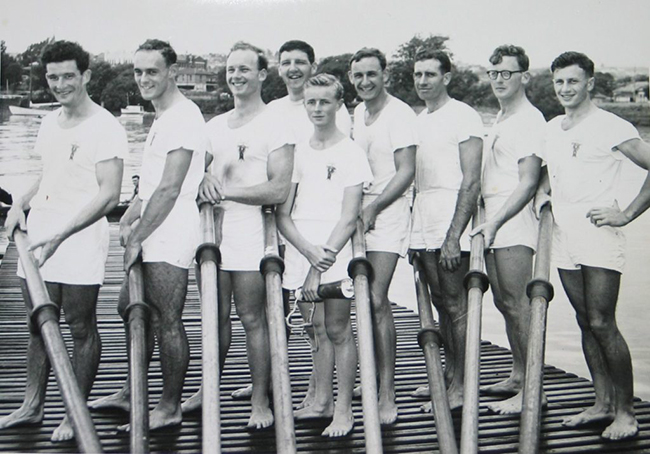 Jack finished off with a great story of a Henley regatta where they lost the senior eights by a very small margin which they thought that they had won. David ‘Crockett’ Boykett and Jack decided that they should have the pleasure of the Grand Challenge Cup for the evening. They ‘borrowed’ it from the victors and returned it to them the next day!

Jack and his wife Jone were the guests of your correspondent in the Henley enclosure in 2020 where he gain these valuable insights.