Above: Deane in the bow seat of the winning 1936 maiden eight at Ballarat

Deane Morgan hailed from Sorrento and joined Mercantile Rowing Club in season 1934-35. His first recorded appearance in regatta racing was in a Maiden Eight at Henley in November 1934. He rowed consistently and with varying success in Maiden, Junior and Lightweight events for the next five years when he left, as did so many other Club members, to serve his country.

Above: Deane with his mates from the Club enjoying the water at Rosebud on the way to Sorrento for the weekend – from the left Jack Jones, Clive Ward, Deane Morgan, Eddie Jones and Peter Hemming. Photographer: Arthur Atkins

Returning from active service in 1945 Deane was immediately back with the Club and rowed for some seasons in Junior crews. But it was in the administration of the Club and of rowing that Deane made his major contribution and from which he derived much enjoyment and well deserved satisfaction. He had been on the Club Committee briefly before the war and was elected again in 1946, serving continuously until 1964. He was Captain from 1947 to 1951, a period of great expansion in membership and success on the water.

Deane had the perfect job for a person of his personality, he was the sales representative/relationship manager of Carlton & United Breweries. He knew every publican in Victoria and had to visit them all. Between Deane and fellow Club member Mick Williams, a director of Richmond Breweries, they were always able to find beer in the post war beer shortages.

Deane was on the V.R.A. Committee for a number of years, first as the Club’s delegate, and then as an Executive member from 1951 until 1962. Apart from his contribution to the Club and to the Association, Deane was also active in Regatta organisation as secretary of the Upper Yarra Regatta Committee and of the Melbourne Amateur Regatta Association (Henley).

He was also heavily involved in the conduct of rowing events in the 1956 Olympic Games as the image below demonstrates.

Deane managed several Victorian teams at the Interstate Regatta and was well known to a wide circle of friends in rowing throughout Australia.

Over many years Deane, Tom Rodda and Ron Richardson travelled to regattas together  (Ron as an Umpire). In 1979 Deane, Ron, Bill White and Bill Waterfield  extended their tours overseas travelling to Bled for the World Championships. Deane was the best man for Ron Richardson at his wedding to Rosemary.

As part of his role as Secretary to Australian Henley, Deane conducted the “Miss Henley” contest. Deane’s “Miss Henley” (Barbara Stewart)  became the first “Moomba Queen”. He successfully brought a great deal of publicity to the regatta.

In recognition of his service to the Club and to rowing Deane was made a Life Member in 1958 and elected a Vice President in 1964. 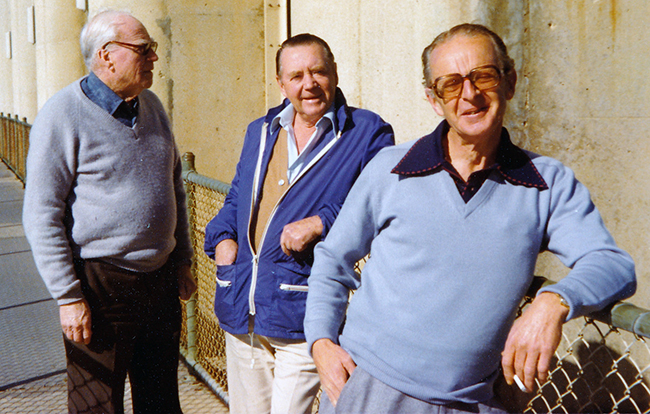 Above: Deane in his later years on a road trip to the opening of the Westlakes course – from the left Tom Rodda, Deane Morgan and Bill Morrison. Ron Richardson the photographer.

Deane fell to the rowers disease of skin cancer.

Deane’s ashes were poured into the Yarra River at the finish line from a boat stroked by Herb Shears and coxed by Ron Richardson. The boat stopped, Herb stood and then spread the ashes. A posy of flowers were floated into the river from the boat by Ron.

The obituary in the annual report finished as follows: “To those of us who rowed with him, worked with him and enjoyed the relaxations of the Club with him, we will miss him greatly.”

Andrew Guerin (based on Deane’s obituary in the 1986-87 Annual Report and enhanced with recollections from Rosemary Richardson, Jim Harvey, Arthur Atkins and the author)
October 2018