Roger Moore was a significant member and leader of our rowing community.

Roger was an astute coach, administrator and commentator of the sport. He had a razor sharp eye for good rowing and a willingness to express his views, sometimes quite stridently. He served as an Australian selector and was a Councillor and Board member of Rowing Australia.

He was passionate about rowing and could talk about it for hours. Fellow rowing aficionados and long term friends David Bishop and Kerry Jelbart were willing participants in such discussions through to his death. Australian chairman of selectors Brian Richardson, also a long term friend, was also not immune to such debates and credits Roger’s noted school coach Albert Bell for developing this interest. Of perhaps less interest to many rowers was his commentary on his beloved Geelong Football Club!

Roger had a great interest in, and respect for, the history of our sport. He loved the traditional races in the sport, specifically the local Head of the River races, the University Championships and the Interstate Championships. He regularly made himself available to coach such crews. He was also a strong advocate of lightweight rowing and bemoaned the forthcoming loss of lightweight rowing at the Olympic Games.

His views on the importance of club rowing brought him in conflict with the South Australian Rowing Association when the new SASI arrangements were introduced - he feared the degradation of the Clubs and his views never changed.

However, he was far from conservative. Roger was a deep thinker of the sport and a technical innovator. He was a supporter of the introduction of the Australian Institute of Sport and the radical changes necessary in the early 1980s. He was an Australian selector at the time of Reinhold Batschi’s appointment and so one of the key decision makers behind it.

Peter Gill from Yarra Yarra Rowing Club insightfully added that he was a superb communicator on all levels, personal, as a coach and clearly in business.

His working life was varied. In Melbourne, he worked for Ron Jelbart at Data Control, a company that produced and sold mechanical computers for use by comptometrists. He was transferred to Adelaide in 1963 with that company. After a move to London where he met his wife Helen, he returned to Australia and initially settled in Sydney.  Roger joined Courage Breweries in Melbourne. His final move to Adelaide in the 1972-73 season arose from his appointment as marketing manager of Coopers Brewery. Later, Roger and his wife Helen became renowned restaurateurs and wine merchants in Adelaide. Their restaurant in the Botanic Gardens was highly regarded.

Roger was kind and generous friend to so many rowers. He was a loved coach and developed so many young rowers in sport and in life generally. He leaves behind wife Helen and three daughters.

Rowing career (incomplete but sufficient to understand his significant involvement)

Roger started his rowing at Geelong College and coxed the 1953 fifth crew. Albert Bell saw Roger's keen eye for technique and could see what was going on in a boat. He was appointed cox of the 1954 Geelong College first crew. His desire to row led him in his final school year to stroke the fifth crew. As a result, he missed the opportunity to be part of the Geelong College winning crew in 1955. He was also a sound long distance runner and a good golfer, but rowing got him whilst at school. His father was a professional golfer at Point Lonsdale.

He joined Yarra Yarra Rowing Club in 1959-60 season, stroked a winning maiden eight at Ballarat in February and by May 1960, was elected to the Committee.

In the 1960-61 season, he was elected as the Yarra Yarra Rowing Club Captain, stroking the winning Victorian Champion junior four and then went onto stroke the Victorian Penrith Cup crew. Roger believed his crew was better than the third placed result. He regretted that Victoria did not take their own boat and borrowed a very heavy four with wooden canvasses, a boat that was far too heavy for such a light crew.

Roger in the stroke seat of 1961 Victorian Penrith Cup crew

He was Captain of Yarra Yarra Rowing Club again in 1961-62 and handed in the oar for a megaphone, coaching successful Yarra Yarra crews such as the junior eight at Henley. It was at this time he recruited senior rowers to the Club including Jim Howden who along with John Castle, raced at the first World Championships in 1962. He coached a Yarra Yarra four at the National Championships. 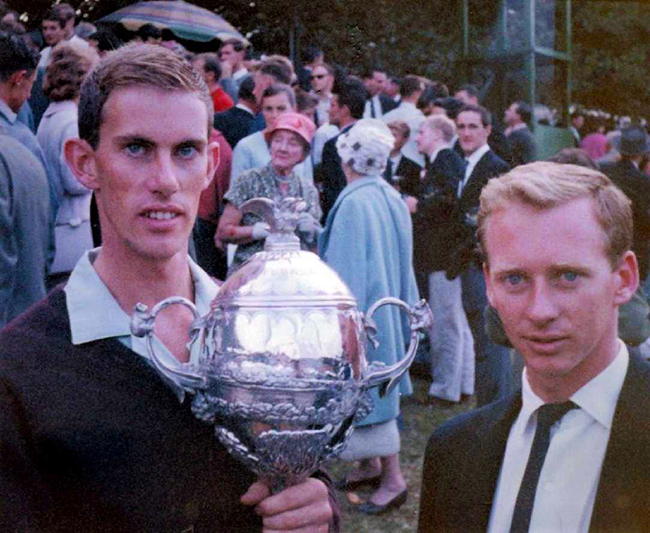 Roger's first coaching win at Henley on Yarra in the Founder's Cup with a Yarra Yarra crew stroked by Ian Allen, seen here with Roger

Roger continued as Captain in the following 1962-63 season but resigned in January 1963 when he moved to South Australia.

David Bishop recalls that South Australian rowing was at a low ebb at that point with the first dawn of revival having been started by Jack M Fletcher. Fletcher was a matter of fact banker who was transferred from Melbourne to Adelaide and based himself at Adelaide University Boat Club. He had started to turn around lightweight rowing with a good second placing at the University Championships in 1963. Roger continued this work in 1964 after doing some rowing and sculling himself upon arrival. His University Championships crew again finished second in 1964 but gave him a base for interstate racing in 1965.

1965 Interstate Championships SA Penrith Cup crew, coach - Second. This was a good crew and Roger experimented with tulip blades, rigging changes to obtain the optimal entry point into the water, training with tempo changes with an emphasis on the reversal at the catch. The crew worshipped Roger and the highly technical coaching provided.

1966 Roger moved to London where he worked and met his wife Helen. He based himself at Thames Rowing Club with fellow Yarra Yarra rower Alan Rice. He coached the Australian coxless four whilst in England and for their race at Henley Royal Regatta. David Bishop credits this time in London as cementing his views on rowing, "his road to Damascus". Specifically it arose from a series of lectures given by Dr Karl Adam and another at Bisham Abbey on the Thames. The British had got Adam over to teach them of the successful work under taken him at the Ratzeburg Rowing Club. Adam was one of the most successful and innovative German rowing coaches of all time. Roger learned about the importance of weight training, high and flexible ratings, instant reversal at the front turn and restrained movement around the back turn.

Roger returned to Australia and initially settled in Sydney.

Roger moved to Melbourne late in 1968 with Courage Breweries.

1970 Australian Universities Championships Monash men’s eight, coach. Lloyd Williams had to withdraw from coaching this crew and Roger took over. This was the beginning of a remarkable few years.  Many people joined Monash University Rowing Club, including Eric Vahl Meyer from Wendouree, Kerry Jelbart from MUBC and David Bishop from Adelaide. A strong group was formed.

1971 Victorian Championship Eight and Four, Monash University - coach - First. In David Bishop's words, "this crew was better than the sum of the parts, just fantastic stuff".

Roger moved to Adelaide in 1973 to take up the Marketing Manager position at Coopers Brewery.

For many years a successful coach at St Peters College with their second crew and later at Pembroke coaching their first eight.

"Rowing is a simple sport stuffed up by experts"

"Go out there and thrill me."

“You need a stable platform and three things. Clearance, clearance, and clearance and the most important item is clearance.”

Members of Yarra Yarra recalled another:

"If you reflect on that you will see that I am right!"

In January 2021, Adelaide University Boat Club named a new eight in honour of Roger. It was christened by his wife Helen. In the Club's report of the event, it was stated that: Tom Game, a previous student/mentee of Roger, read a prepared statement explaining the impact of Roger’s legacy with the club, “not a eulogy, more a celebration of who he was so we might remember him”. Game began with a kind word to Helen, Roger’s wife, “I’m so sorry that even after he is gone, you still have to attend these rowing things!” Game drew upon and relayed decades of memories and experiences from those that Roger touched with his love of rowing and mentoring young athletes. Among these were fond sayings of Rogers, his ethos in rowing, his value for sport in general, and absolute love of making a boat move well.