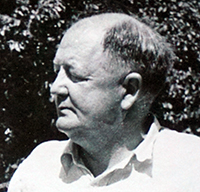 Vice-President of the Victorian Rowing Association

Alec learned his rowing at Ballarat City before moving to Albert Park in 1927 after his Ballarat City crew was defeated in the maiden eights by Albert Park by one foot.In his 1931-32 season, he won the Victorian Champion pair, four and eight in the one season. He was the manager of a building wrecking company and the Mayor of Brighton outside his rowing interests.He died in 1984.

A newspaper report of the 1932 Victorian crew provided the following description of his rowing career to that date.

1932 Victorian crew with Alex in the stroke seat