McBrien served in WWI in the pay section.

His first wins for the Albert Park Club were in maiden crews in 1913-14, progressing to junior crews by the end of his first season. By March, 1915, he had won a Championship Eight for the club.

In a book written by his son Bruce on Melbourne, he commented that his father's 1913 win at the Melbourne Regatta in December 1913 was won by only one foot from Hawthorn and regarded as one of the finest rowing races ever witnesses over the Henley course (on the Yarra). He also added that his father was a staunch committee member of Albert Park Rowing Club and also a hockey player.

A publisher by trade, ‘Like’ enlisted on 3rd April, 1916 as a private in the 60th Battalion at the age of 23. Transferred to the Administrative Headquarters in London, Like returned to Australia on 23rd May, 1917 for family reasons.

An avid sportsman, Like returned to the Club and married Madge Summers on 16th July, 1919 and had two children.

He went on to have a public career as a prominent sports administrator and politician. He was secretary and president of the South Melbourne Football Club in the 1920s, and was secretary of the VFL from 1929 until 1956.

From 1943 to 1949, he was elected to the Legislative Council as an Independent for Melbourne North. 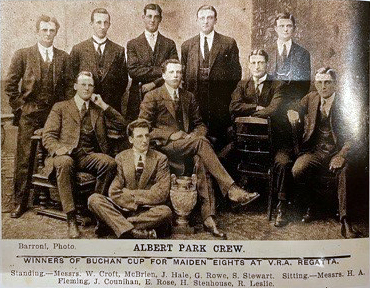