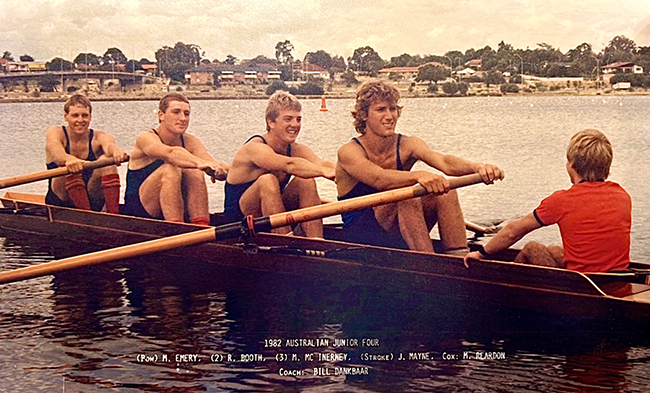 1982 Australian Junior Four with Joel in the stroke seat

Mid 1990s - Following his active rowing career, he coached the CBC first crew for a number of years

Australian Trans Tasman Under 23 Eight - Joel fifth from the right

Joel commenced his rowing at CBC in Adelaide. He was a strong rower with natural length which made him a significant asset in any crew. His natural sporting ability was evident with him taking a year off rowing in 1984 to play football at the highest amateur level.

No doubt he would have thoroughly enjoyed his win in the 1983 Interstate Youth Eight Championship, the first win in that event by South Australia. This is a tough race to win and to win on Perth's Canning River by just 0.03 second, would have been very satisfying. The Victorian led until the last 100m when he lifted the South Australians from the stroke seat to storm home. The judges took 10 minutes to make a decision. 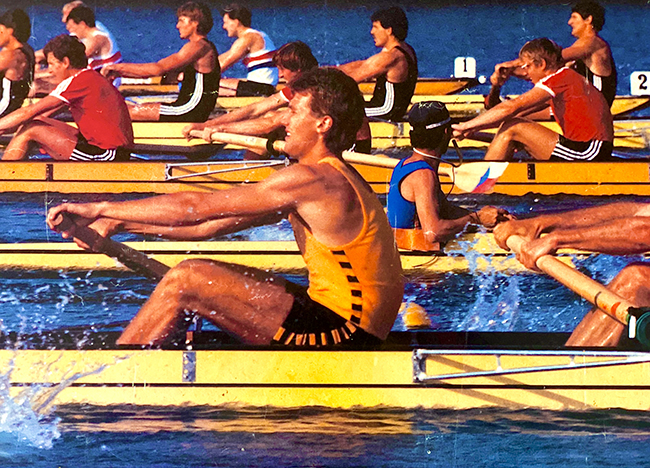 Joel in the 1985 Australian Eight

Jaime Fernandez remembered Joel fondly in the following terms. He was a very charismatic person and well loved amongst rowing people, with whom he remained in touch, particularly a number of his crew mates from back in the day. I knew him and his family as a schoolboy in Adelaide as he and his brother were alumni of the same school as me, CBC. His father would let us stop over at his place between races at West Lakes when there on regatta days.

Andrew Guerin, with great assistance from Jaime Fernandez
May 2022