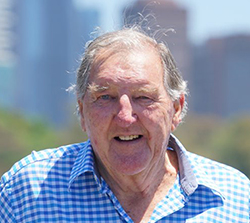 Above – 1956 Olympic Eight with Garth in the five seat

2010 – Inducted into the Victorian Rowing Hall of Fame

Garth has been a great supporter of the sport and also rowing at Geelong Grammar. A great raconteur and keenly sought speaker at rowing functions.