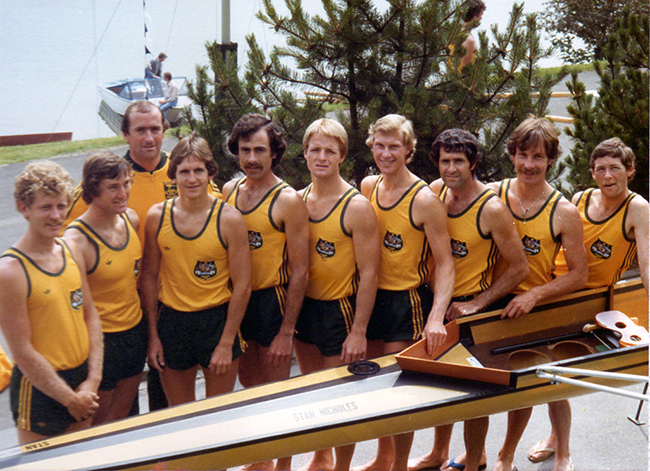 Adrian has maintained a life-long involvement in the sport from the time that he started as a thirteen year old cox at Mercantile Rowing Club in 1967.

Maintaining his close connection with Mercantile, Adrian also steered three First VIII crews for St Kevins College (1968, 69 & 70). In 1971 he was selected to steer his first Kings Cup crew for the regatta in Perth and they were successful by a narrow margin in a very tight finish.

At the end of the 1976 season he moved to MUBC and in 1978 was part of the successful Penrith Cup and National Championship Lightweight Eight crews that year. 1978 was the last time that the Penrith Cup was a coxed event. His efforts were rewarded with inclusion in the 1978 Australian Lightweight Eight to compete at the World Championships in Demark. After winning their heat over the more favoured Great Britain crew they finished third in the final behind the British and the Danes but in front of the fast finishing Spanish crew.

At Melbourne University Boat Club Adrian coached many winning Inter Collegiate and Intervarsity crews with his most memorable success being the 1980 VIII which won the Oxford and Cambridge Cup in Canberra. Adrian is a strong supporter of masters rowing and is invariably called upon each year to negotiate the Head of the Yarra course as part of a masters crew. More than anything, he has a passion for rowing history and the recording and preservation of all rowing memorabilia. He was a member of the MUBC 150th Celebration Committee which published one of the best rowing club histories ever produced in Australia.