1989 – Interstate Women’s Youth Four Championship bow – Race not conducted due to a cyclone.

Rebecca joined Mercantile in 1988 while at GGS whilst under the guidance of GGS rowing master Paul McGann. She took part in the inaugural AIS talent ID program across Australian schools which put her in the top 10% in the country. However she was rejected for being too light and perhaps should have had more GGS stews! Lightweight rowing was not an Olympic sport at that stage and so not supported by the AIS. Though no guidance was given by the AIS as to how and when to best focus her talents, she was thankful for the fortunate guidance of Paul McGann who suggested she join Mercantile. She did so while still in her HSC year and started training with the lightweight B team. 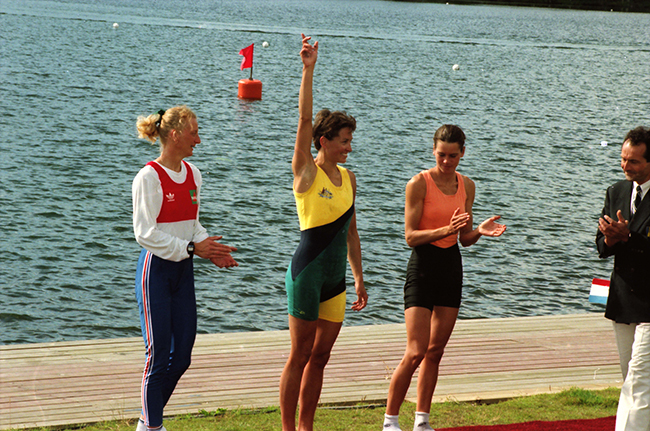 Rebecca contracted chronic fatigue in 1992 and was unable to take up a VIS scholarship. However in 1993, the lightweight double scull was announced for introduction into the Olympic program. This spurred her back into the sport and served to rebuild her spirit, confidence and physical well being. In changing from sweep to sculling, she sought the best sculling coaches out and so moved to Sydney to be coached by Ellen Randall. In Rebecca’s words, “Ellen provided compassion and loving guidance which resulted in Rebecca becoming a World Champion in 1995. The best coach I ever had and a role model for the work I do today in building high performance teams in the corporate world.”

Interestingly in 1991 she was selected originally in the double. But coach Harald Jahrling was concerned about combining the tall lightweights, Virginia Lee and Rebecca, so he forced her into the single that year. In Rebecca’s view, it was the best mistake he ever made! She regards the 1996 as her most challenging rowing year, just to get in the boat. Although proud of her bronze, she is still dissatisfied with the result. “As an elite athlete there was an element where I always felt eternally dissatisfied as I constantly strove for perfection.”

Rebecca was a Board Member of Rowing Australia and was the Chair of the Athletes Commission. Rebecca’s father Bob competed in the 1956 Melbourne Games in 110m hurdles.