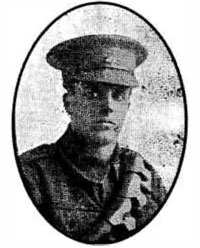 Charles Roy Jeffreys was the son of Robert and Annie Jeffreys. Robert was a tailor in Main Street and his son was educated at the School of Mines and was working at Winson 's foundry where he showed great promise as a mechanical engineer.

He enlisted during a recruiting drive in July 1915 but like Lennox Duncan was also initially rejected due to his small chest expansion! He was a keen member of the Rowing Club and also the Rifle Club.

Jeffreys was with the 2nd Field Company Engineers before going to the 1st Divisional Supply Column serving in Egypt and then France. At 1.45pm on 21 January 1917 he was the lookout man on a lorry being driven over a level crossing at Behencourt when it was struck by a train and he was killed. He was buried the next day at the British Military Cemetery. Contay. France.