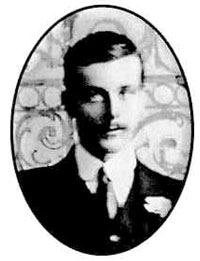 Local lad Russell William Hosie was born in Bairnsdale and worked as a tanner, possibly at Jackson's tannery on the banks of the Mitchell River.

He was a valued member of the rowing club and had represented the club on numerous occasions. He enlisted in January 1915 and his brother, Gustave, also enlisted six months later.

They were Chris Cooper's brothers-in-law. Russell was with the 60th Battalion and they both ended up sailing on the Kinfauns Castle from Alexandria to Marseilles.

Together they disembarked on 29 June 1916. They were both reported missing and both were determined killed in action bv a court of enquiry some time later. Neither of their bodies were recovered, both being buried in no man's land. Such was the mayhem of Fromelles on 19 July 1916.