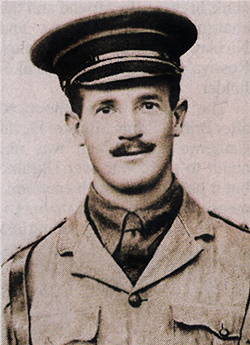 Captain Keith Heritage MC was born on 16 September 1882 and raised in Longford Tasmania and was one of eight children of George and Eleanora Heritage. His English grandfather, James, was a convict who was sentenced to transportation to Tasmania for theft. His father, George, was to become Tasmania’s inspector of schools and was a significant reformer of Tasmania’s school system.

Keith Heritage was a champion oarsman who rowed both in Tasmania and New South Wales. Heritage rowed for Sydney Rowing Club as well as rowing in Tasmania and he competed for both Tasmania and New South Wales in the seven seat in the Interstate Men’s Eight Championships over five years spanning 1905 through to 1911. His crews recorded three wins - in 1906, 1909 and 1911, a second in 1905 and a third in 1910. He was a member of the winning 1912 Henley Royal Regatta Grand Challenge crew rowing for Sydney Rowing Club in three seat, and he was selected as a reserve for the 1912 Olympic Squad, although he did not compete at the Stockholm Olympics being replaced by Hugh Ward.

Keith Heritage had five years of military experience serving with the Tasmanian Infantry Regiment as a Colour Sergeant in its machine-gun section prior to the First World War and he is credited as the first Australian to volunteer on 11 August 1914 for the Australian Naval and Military Expeditionary Force at the outbreak of the First World War.

He was initially sent to German New Guinea as a Lieutenant shortly after war was declared. In 1915, he returned to Australia and joined the 19th Battalion AIF as a Lieutenant. He landed at Gallipoli on the 21st August 1915 with Sidney Middleton, a mate from Sydney Rowing Club who would, after the war, compete in the AIF Number One Crew that won the King’s Cup at the Henley Royal Peace Regatta in 1919.

On 19 December 1915 Captain Keith Heritage was one of the last Australians to leave Anzac Cove at the end of the Gallipoli Campaign. He served with distinction throughout the war finishing with the rank of Captain. On the Western Front, he was awarded the Military Cross for conspicuous gallantry after leading a raid on enemy trenches near Armentieres in France in June 1916. Amongst his actions that day, he was the last to leave the enemy’s trenches and carried back a wounded soldier under heavy fire and throughout the raid was characterised as setting an example of cool courage.

A month later he was killed instantly by a high explosive shell in the trenches. He was in the trenches making his inspections when he noticed that two of the soldiers appeared exhausted. He told them to get a couple of hours sleep whilst he took over their sentry duty. He also gave them some of his food which was scarce due to breaks in supply lines. Whilst they rested, a shell landed nearby Keith killing him instantly. He was buried at Pozieres. Captain Keith Heritage died on the 26th July 1916 aged 34.

Keith Heritage’s family and friends had heard the news of his award only days before news of his death reached Australia. His sister, a nurse in Sydney, was celebrating her brother’s award by wearing the colours of the 19th Battalion at work. As she was dressing a patient she noticed a paragraph in a newspaper announcing the death of her brother. She collapsed in shock.

Captain Heritage is commemorated on the British Pozieres Memorial in France and his name is one of 102,000 names inscribed on the Roll of Honour at the Australian War Memorial.

Five boys from Keith’s family signed up to serve in the First World War, four returned, and three of them were decorated for heroism under fire. Keith’s brother Francis was awarded the Croix de Guerre, and after the war he headed the Royal Military College Duntroon. Lieutenant Austin Heritage received the Military Cross. Sapper Robert Heritage was sent home during the war after suffering a severe infection and his fifth brother, Stanley, joined the Canadian forces. Keith Heritage did not return home to Australia.

1912 Olympic Squad with Keith Heritage in the back row