Col Henry Guinn was a key member of Mercantile Rowing Club and one with whom it isever so proud to be associated. He was a man of great stature who achieved success in rowing, was committed to helping his fellow man and recorded a most impressive war record. He had enlisted for the First World War late in the war at the age of 18 and was demobbed before seeing active service. However in WWII, he can only be described as a hero when commanded an infantry battalion in WWII.

One of the problems with a member of Henry’s age is that there are few others in this world who can fill the gaps between the legend and the real person. Further, the Club has had two fires and so it’s records of the period in which Henry rowed are in poor shape. We can say for sure that he was no relation to Stanley Guinn who raced at the Club at much the same time.

We can conclude that he had a successful rowing career with great success at the senior level. He was however, unable to be selected into Victorian crews.

The details that we can find is provided below.

We can ascertain is that he was a member in 1919-20 season but did not race in that or the subsequent two seasons. His first race appears to be the maiden eights at Henley on Yarra in October 1922. His first win was in a maiden eight at the Maiden Regatta on 1st December 1923. It was not until Henley on 23rd October 1926 that we have located another win for Henry, this time in a junior eight. They won again at the VRA Regatta in the next week, and at Upper Yarra and ANA Holiday Regattas after that. At Bairnsdale and Sale Regattas he won the junior fours. 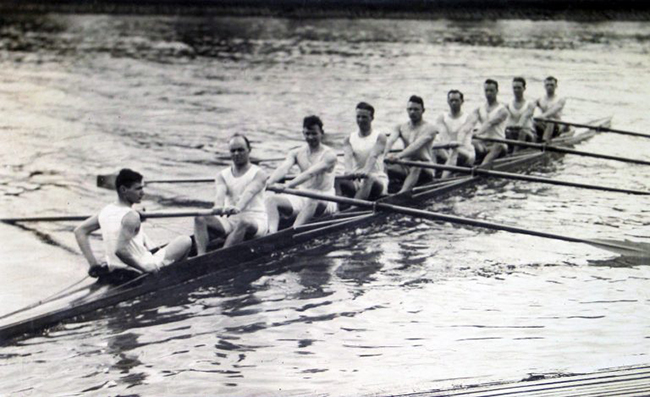 Above: Henry in the seven seat of a winning junior eight in 1926

In the 1930-31 season, he raced successfully at Henley and the VRA Regatta in the senior eights but the Championship eluded Mercs. They also won at Ballarat.

In the 1931-32 season, Henry continued to race senior eights winning at the VRA Regatta and also at Henley. He did not race in the Championship race or any other later regattas in the season. So it appears that the successful rowing career of Henry Guinn finished in late 1931 or early 1932.

At his death he was not only the oldest Mercantile member, but also the oldest MCC member.

ln the Second World War, he commanded the second seventh infantry battalion, one of the three battalions which constituted the 17th Brigade. Many people would say that the 17th Brigade was the greatest fighting brigade of the 2nd AIF. At Domakos Pass in Greece, he commanded a noted rear guard action against a German force of enormous strength for an amazing amount of time.

ln Bardia in the Desert, further distinguished action of the 2nd 7th battalion was recorded where the AIF’s true colours were shown. In Africa his battalion pushed further west into the German lines than any other force. When replaced by other troops, the ground was quickly lost. ln Crete, the battalion was almost destroyed with many taken prisoners. Henry reformed the battalion in Palestine training troops to recreate the famous battalion. ln rising from the ashes, the battalion was thereafter known as the “fiery phoenix”.

The battalion was returned to New Guinea where they saw much action in Wau, Lae and Salamaua. We understand that until a small number of years ago, he undertook a 5-mile walk each day. He was unusual as a commander as he was both highly respected and popular. These qualities were not common in this combination. 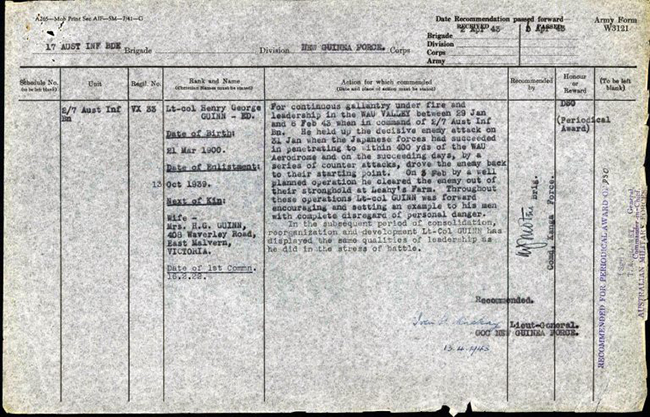 Above: DSO recommendation for continuous gallantry under fire

After the war he was discharged and was appointed the Director of the Bonegilla Migrant Camp, a position for which he is perhaps best known. He was director for ten years until his retirement in March, 1965. He was much loved and but feared as he exercised his military discipline on the migrants. Bonegilla migrant Reception Centre in Victoria was established in 1947, and some 250 000 migrants have passed through it. For thousands of newcomers now settled in other parts of Australia, Bonegilla was their first home. 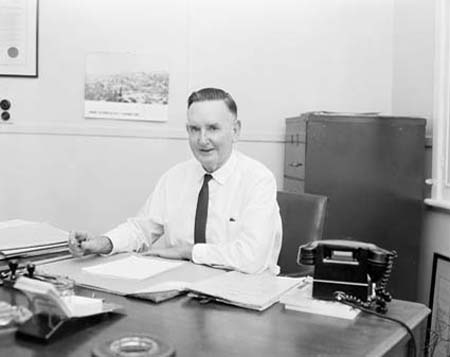 Above: Henry at work at Bonegilla

At the age of 99 he returned to Melbourne for Anzac Day and enjoyed some beer with his fellow members including fortunately your correspondent. The last member to meet Henry was Simon Newcomb who represented the Club at Henry’s 100th birthday party.

Henry was great Mercantilian and a famous member of our sport.