He entered the Royal Military College, Duntroon on 12 March 1914 in the fourth intake of cadets and graduated on 3 April 1916 and enlisted the following day, 4/4/1916. The next day he was appointed as a Lieutenant and embarked for England a few weeks later with the 28th Battery of the 7th Field Artillery Brigade. In September 1917 he was promoted to Captain and appointed as Adjutant to the 7th Field Artillery Brigade. On 1 April 1918 he was killed by a German shell bursting in the hut he was in at the time. He was just 22 years of age.

The recommendation for his Mention in Despatches (dated 18 September 1917) states that the award was for his work with the 28th Battery, 7th Field Artillery Brigade, which he had served with since its formation, particularly for his leadership and coolness under heavy shellfire.

“Has displayed exceptional ability, courage, and devotion to duty in the Field. He has served with the Brigade since its formation, and the Battery to which he belonged - until recently appointed Adjutant - materially benefitted by his qualities of leadership and ability. Under heavy shellfire he has displayed the greatest coolness, and has invariably set a splendid example to his Unit in this regard”. 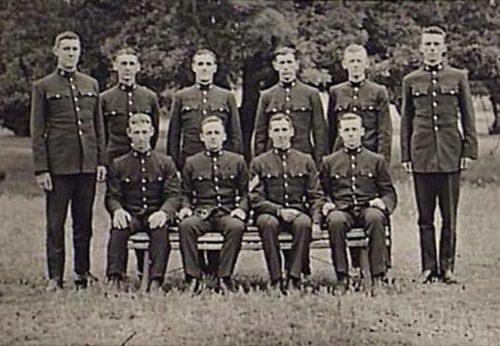 Marked on back: 'To Mum & Dad, with love from George'. This is likely to be Captain George Jerrard Greenshields since it was acquired by Museum Victoria with a collection relating to his service. George is most probably seated in the front row third from left as he has Lieutenant stripes on his arm. He graduated as a lieutenant and is the only cadet with stripes.