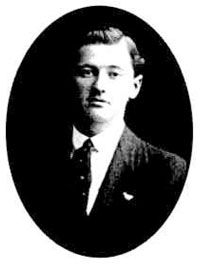 Archibald Mathison Green, a civil servant, was born in Bairnsdale in 1895 the son of James and Elizabeth Matthews. He spent two years in the Senior Cadets before enlisting on 28 August 1915 when he was 20 years old and joined the 4th Field Artillery unit.

He sailed from Melbourne on the 5 January 1916. Green had been in and out of hospital with minor ailments before being dangerously wounded on 10 February 1918.

He was running wires from the Battalion position to a strong point about 9.30pm with the 6th Field Brigade when they were caught in a shell burst. The field ambulance conveyed him to the hospital at Bayne but it was here that he died two days later from his wounds - compound fractures in the hip, arm. legs and both hands. He was 23 years old.