John Godfrey was a sculler of note in Hobart Tasmania and a founder of rowing in the Bendigo region.

One of the founders of rowing in the Bendigo Region was John Godfrey. Godfrey came from Hobart, Tasmania and held the position of gold assayer for the Bank of Australasia, which was situated opposite the Shamrock Hotel on the corner of Williamson Street and Pall Mall. He built his own sculling skiff here in Bendigo (he was a sculler in Tasmania). To raise interest in rowing he put the skiff on display outside the Bank. The boat was called "Australasia". 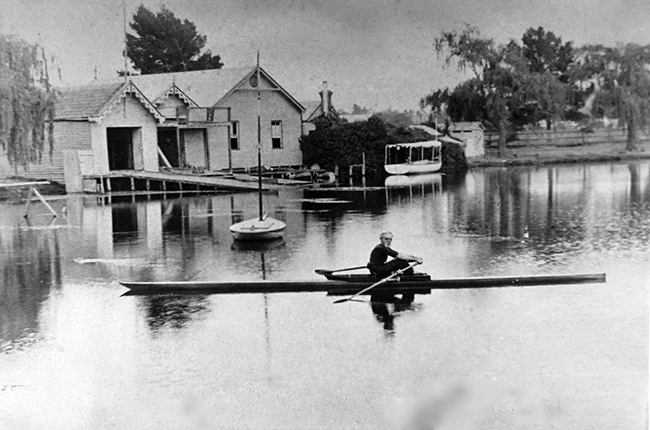 Mr John Godfrey Esq.. A founder of the Bendigo rowing

Forty-four years of faithful service in one institution is a record that few men can lay claim to. Such, however, is the re cord of Mr. John Godfrey, who retired from the employment of the Bank of Australasia in Bendigo last week. Mr. Godfrey has been the recipient of numerous letters from officials of the bank, all of whom paid a high tribute to the esteem in which he is held by his former employer.

Mr. Godfrey was born in Hobart in April, 1842. He only went to school for 12 months, and is practically a self-taught man. He started work when he was ten years old as an assistant in shipbuilding yards. After just over a year at this he had "a few words'' with his employer and left. Subsequently he was engaged on board a small cutter which traded on the Derwent. From this he went on the river as a licensed waterman, and continued in. this calling until trade fell off, and he started in the acid works at Hobart, where he remained until "the firm ceased to exist".

He entered the service of the Bank of Australasia, at Hobart as messenger on 13th July, I867, when Mr. H. J. Peters was manager. After the lapse of two years and eight months Mr Peters left Hobart for Bendigo, and the accountant was appointed in his place. On Mr. Peters's departure the officials decided to dispense with the post of messenger for the time being, and Mr. Godfrey took up the position of storeman to a firm of well known brewers in Hobart. While in their employ he received a telegram offering him the position of caretaker of the Bendigo branch of the Bank of Australasia. The offer was a decided improvement on the position he was then holding, and he decided to accept it.

Mr. Godfrey made his first visit to Bendigo when he was nine or ten years old, having walked with his brother from Melbourne. All the inhabitants of the place lived in tents in those days, and some lively scenes were witnessed, the revolver being used very frequently to settle arguments. Mr. Godfrey's first visit was not of very long duration, for his brother, having business to do at Port Fairy, was anxious to get there, and they set off on foot. Mr. Godfrey has vivid recollections of his journey on that occasion. Part of the way he travelled barefooted, and eventually arrived at his destination worn cut.

He entered the service of the bank at Bendigo in July, 1871, and did not know he was coming to Bendigo until he arrived at Golden-square, the name of the town having been changed to Sandhurst. "When he arrived at Golden-square he recognised the place, and remarked to his fellow passenger that this was the Bendigo district, and was surprised to learn that Sandhurst and Bendigo were identical. When Mr. Godfrey first took up his position here the bank was a red brick building, and had no balcony. The paths in Williamson-street were of red gravel, and when it rained pedestrians had to wade through mud, often reaching over their ankles. The Bath Corner was a mud hole, with a few small shops, and on the site of the City Family Hotel was a small house with a garden.

There was a flour mill where the present Salvation Army Barracks now stand. There, were very few hotels in Mitchell street at that time. Mr. Godfrey had been smelter at the bank from 1873 until 21, years ago. He used to go to Chiltern and smelt, the gold there. He estimated in 1890 that about 81/2 tons of gold had passed through his hands up to that time. He slept at the bank for many years, and always made a thorough examination of every window and key before retiring. He also occupied the position of messenger, and made many friends amongst the postal officials, share brokers. and business men of the city. A very warm feeling of friendship has sprung up between them, and Mr. Godfrey retains feelings of gratitude towards the officials of the bank and the members of the outside public with whom he came in contact

Mr. Godfrey, is very fond of rowing and was practically the "father " of the Sandhurst Rowing Club. He started rowing in 1858, and when a young man in Hobart he won several prizes for rowing, amongst which may be mentioned the Champion Sculling Race in 1868. When he arrived in Bendigo he tried to arouse interest in the sport and with this object in view he constructed a small blue boat, which he exhibited outside the bank. He subsequently took the boat to the dam in the Upper Reserve, and rowed round in it several times. At that time there was only one man who dared to venture in the boat, with Mr. Godfrey, and he was the accountant at the bank. Great interest was shown in the boat, however, and after a time it was decided to commence a rowing club in Bendigo. At the end of 1872 the beginning of 1873, the Sandhurst Rowing Club was started at the Upper Reservoir. Grassy Flat. But in later years it removed its quarters to Lake Weeroona. The first secretary was Mr. H. W. Fuller. Mr. John Read was the first captain. Mr. Godfrey still possesses his first membership ticket, dated 1st. May, 1873, to 31st April, 1874. Since that time he has shown great interest in the club. He has built several boats, and acted as coach on many occasions. He still retains a keen interest in the club. One or two years ago the members presented him with. handsomely framed photograph of a number of the crew as a token of the respect and esteem in which he is held by them. The club is now one of the strongest Victoria.

Mr. Godfrey has been "in harness" for 60 years, and now retires on a handsome pension. He is one of those men, however, who cannot be idle, and will devote his time to beautifying his garden. His house and its surroundings are a monument to his energy. Originally a small house, built on a miners' right holding, he has improved it until it is a credit to Hargreaves-street, and a model of comfort. His garden is well stocked with all kinds of fruit trees and flowers. Mr. Godfrey has had a family of 15 children, nine of whom are still alive. He has 33 grand children and one great-granddaughter, and is a great favourite with them all. Next July he hopes to celebrate the 50th anniversary of his wedding day, which he hopes to celebrate by taking his wife to the annual regatta at Hobart, not with the sole intention of seeing the regatta., but in the hope that, he may meet some of his old friends and competitors of his racing days.

Such is a brief record of a man who has had a long and honourable career, and is now entering upon a well-earned rest. That he and his good wife may long be spared to enjoy the fruits of their labours will be the sincere wish of all who know them.

Another snippet of information of his time in Hobart is found in The Mercury (Hobart) Saturday 29th February 1920, page 4.

Extracts from a letter received by Mr T.S. Nettleford hon secretary Hobart Regatta Association, from Mr John Godfrey (now living at Bendigo) are of interest to old time rowers and residents of Hobart. Mr Godfrey was well known here in the sixties as a very successful and enthusiastic competitor and for many years has forwarded encouraging letters to the committee, accompanied by substantial financial support.

" I received your letters with enclosed clipping of "The Mercury" There is a mistake in it about my rowing in the seventies. I left Hobart in 1871 and my rowing was from 1857 to 1870.

It was in 1863 that I won the champion sculls. I built my own boat, and was taken up, boat and all, to the old grandstand to receive a prize of 15 pound, which was presented by the late Mr. Chas Dowdell, of the firm of Belbin and Dowdell, timber merchants. I still have the programme, and thank you for the silk one for 1920.

In an email from John Garland, great great grandson of John Godfrey, he advised that John was the son of John Godfrey and Hanora Ryan. John Godfrey Snr was a convict taken to Hobart (New Norfolk) after the closure of Norfolk Island where he was originally transported to from Exeter in southern England.