1876 Moved to Melbourne and rowed with I Zingari

This picture of Zachariah Giles was taken in 1924 with the committee of Ballarat City Rowing Club. He was a guest of the Ballarat Regatta committee.

At the Ballarat Regatta in March 1872, the infant City club was represented by two fours and a sculler. In the Scratch Fours race, the crew of L.Clark, W.Hughes, H.Pinniger and Z.Giles succeeded in winning the final by a couple of clear lengths in a time of 11 minutes and 51 and ¼ seconds. This was the first appearance of Zachariah Giles and this win in his first race was to be the first of many over the next four years. He went on to be the “gun” stroke man of the early 1870’s.

Although only a Maiden oarsman, in March 1873, Zachariah was selected as the stroke in the Ballarat City crew who entered the very first Intercolonial four-oared race held on the Saltwater River at Footscray. The pundits of the day gave this crew no hope being from “the rush beds” that were Lake Wendouree. However, Peter Cazaly, who had in October 1872 been elected to the club as Captain and coach, in a little over three months produced a crew that was the second fastest in Australia! In 1873 Giles also became the first Ballarat City oarsman to win a Senior race at the Barwon Regatta with the same crew who raced the Intercolonial race of John Stout, John Cazaly and William Crampton. 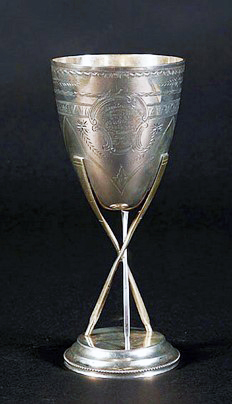 This trophy came to be held in the Vizard Collection of early silver. Zachariah’s great granddaughter Jan Humphries came to Ballarat researching his story and found reference to him in “The Boys From the Rush Beds-the History of Ballarat City Rowing Club” in the local library. At the same time she also came across an auction of items from the Vizard Collection and Zach’s trophy was up for sale. She bid in the auction and won the trophy back. So in a space of 12 days she had found more information and a direct connection to her ancestor. She still has the cup in her possession.

In the Intercolonial race of 1874 held on September 26th on the Parramatta River, NSW, Zachariah Giles stroked the Victorian crew that also had two Ballarat Rowing Club men, Kickham and J. F. Eddington. Mr. Crampton, who competed so brilliantly in the City Intercolonial four in 1873, was also selected in the Victorian crew however due to work commitments he was unable to go. If he had been able to go, the Victorian four would have been an all Ballarat crew. The crew placed second place to New South Wales on the Parramatta River. The distance was 3 miles 330 yards and the time 21 minutes 59 seconds. Zachariah Giles was the club’s first State representative rowing in the Victorian crew representing the then Colony of Victoria. In 1875 he and the crew of Arthur Gibbs, William Crampton and John Stout won all the Senior four-oared gig races for the year.

He represented the club with distinction until 1876 when he moved to Melbourne and joined I Zingari Rowing Club and continued competing with other former Ballarat rowers like John Cazaly, J.F.Eddington and James Cazaly. In 1878, when while working as a guard on the railway, he slipped and was run over by a wagon losing his right leg. It was a tragic end to his rowing career and he was extremely lucky not to lose his life.

More information about Zachariah Giles is included in the 1872 post on ballaratcityrowingclub150 years.com