Thomas Rae Gilchrist 1861-1928, a foundation member of the Mercantile Rowing Club. He was also a Treasurer of the Cub in its early years and was jointly, with the Club's founder Arthur Boyd, the first life members elected by the Club in 1889.

Not only was he a sportsman who won the maiden eights at 1889 Upper Yarra Regatta in the two seat, he played a small but critical role in the creation of the federation of Australia in 1901. He is reputed to be the person who suggested to Sir George Turner the compromise of Canberra being situated within 100 miles of Sydney in NSW. Gilchrist was a respected journalist at the time whose views were widely respected. 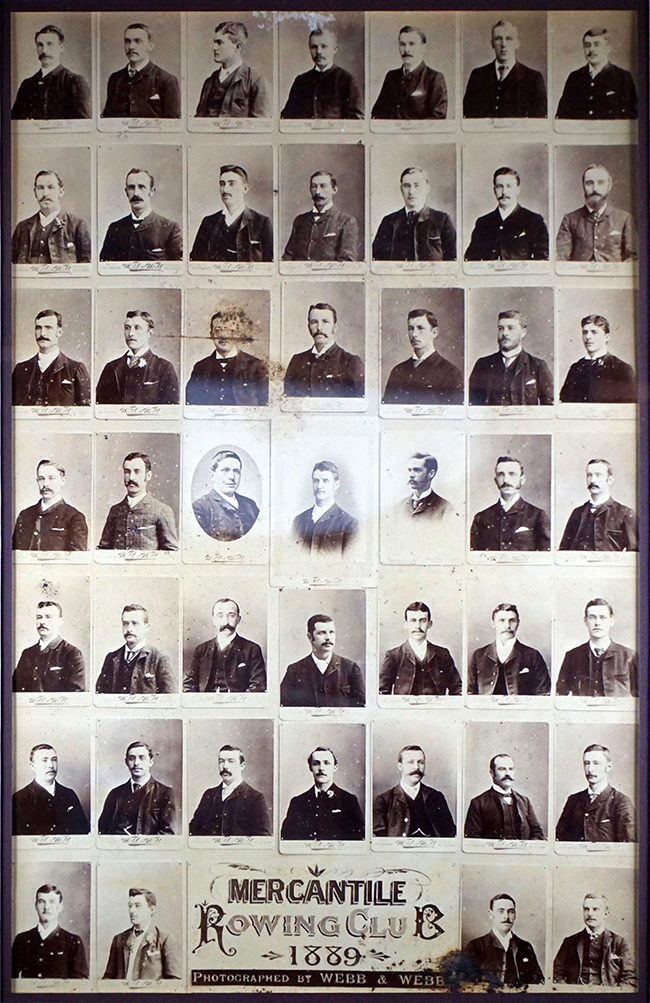 The following obituary, which appeared in The Argus on 30th October 1928, provides an insight into his influential life.

The many friends of Mr. T. R. Gilchrist who was widely known as a former secretary of the Victorian Railways Standing Committee and in other capacities as a public servant, will regret to learn of his death, which occurred yesterday in a private hospital at Ascotvale, after a short illness.

Mr Thomas Rae Gilchrist, who was born at Fitzroy in 1861 was in his earlier years a journalist who played a part in the stirring political events that led up to the creation of the Australian Commonwealth. He entered the service of "The Argus" in the clerical department in the late seventies. Subsequently he became a junior reporter and his work in this capacity soon revealed that he had an instinctive grasp of political affairs. This has led to his appointment to a high position on the staff of "The Argus" which brought him into close contact with politicians of all parties.

His sagacity in anticipating the currents of political life was very remarkable in so young a man. He was also gifted with a grace of manner is which quickly gained the liking and respect of almost everybody he met. After a period of very useful work in "The Argus" office Mr Gilchrist was invited to join the public service. He accepted and joined the staff of "Hansard". Later he expressed a wish to return to journalism, and he was reappointed to his former position on the staff of "The Argus". It was in this second period of journalistic work that Mr Gilchrist participated in the stirring political events that led to Federation.

He had intimate information of all the negotiations that preceded the Federal Conventions and was the trusted and confidential adviser of the Ministry of the day. To him is accredited the suggestion of the modus vivendi which led ultimately to the acceptance by New South Wales of the Federal Constitution. The main question in the final controversy was the site to be chosen for the Federal capital. In the end it was agreed that the capital should be in New South Wales but not less than 100 miles from Sydney, the Parliament in the meantime to meet in Melbourne. This suggestion was made by Mr Gilchrist to the late Sir George Turner, and it was finally adopted.

Shortly after these events overtures were made to Mr Gilchrist that he should be taken to the public service of the State, and he accepted an appointment that led to his being made secretary of the Railways Standing Committee. He remained in the State service for about 25 years and became an authority on all important phases of railway work. His knowledge of the State and its requirements in the matter of railway connections and services was unrivalled.

In 1924 with a long record of unremitting services to the Railways Standing Committee, Mr Gilchrist was offered and accepted the position of clerk assistant to the Legislative Assembly and later he was made Clerk of the Legislative Council. This position he held until his retirement last year. He was not destined however to enjoy complete leisure for when the Royal Commission on Railway Management was appointed, Mr Gilchrist was requested to undertake the secretaryship and he consented. Owing to ill health however, he was obliged to resign some weeks ago.

Mr Gilchrist belonged to a family closely associated in several ways with the history of the State. His father Mr W J Gilchrist was a barrister who was a leading authority on municipal law in Victoria and wrote a valuable treatise on the subject. Mr W T Gilchrist married a daughter of the Rev. Andrew Love who was the first Presbyterian minister in the Western district.

After a service at Sleight's mortuary Chapel, Flinders street, at a quarter past 10 this morning the burial will take place at the Eastern Cemetery, Geelong

The Premier (Mr Hogan) on behalf of the State Ministry expressed regret at the death of Mr Gilchrist. "In the most important positions which he held in the State public service Mr. Gilchrist gained the respect and affection of all associated with him", said Mr Hogan. " He was a man of outstanding ability and was one of the most valued officers of the State up to the time of his retirement."

When the news of Mr Gilchrist s death was reported to the Royal Commission on Railways Management yesterday morning, a motion was agreed to expressing regret and recording appreciation of the assistance which Mr Gilchrist was able to give members in the inquiry while evidence was being taken.