Frank Gibbs was one of the early members of the Mercantile Rowing Club. He was an excellent oarsman and a highly regarded Captain who led the Club from a junior Club to a Senior Club. He died about 1940. He was one of eight children and the son of Richard Gibb. 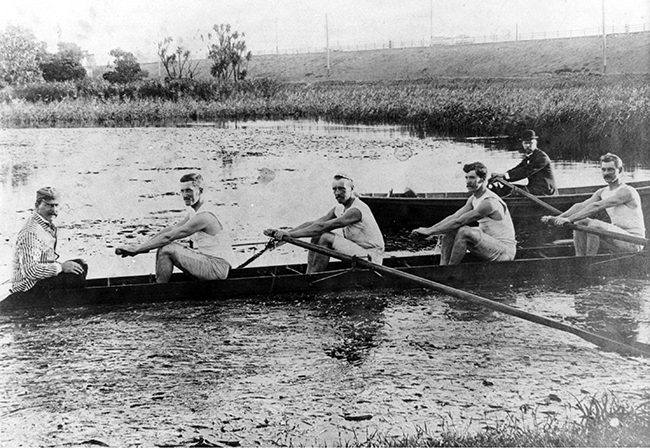 Above: Frank Gibbs in the skiff behind the Club’s first senior championship crew in 1895

Frank Gibbs is first mentioned in the Club history as a maiden oarsman in 1892. He won the maiden eight in 1892 and in the next season stroked a winning maiden pair. 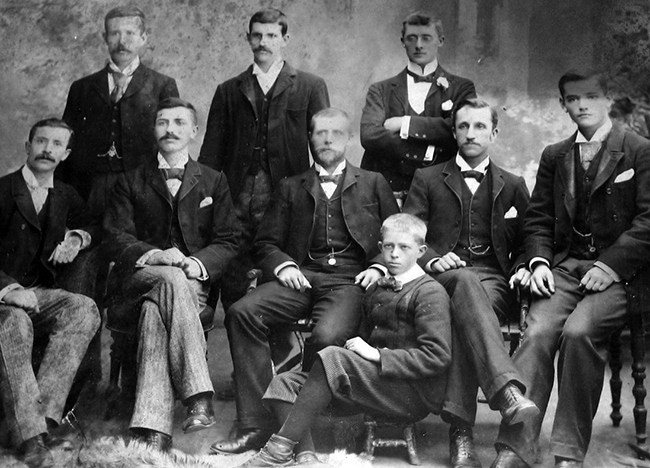 Frank rowed successfully through the junior ranks and in 1895, he got his break to the senior ranks. The Club senior eight won against the great Wendouree crew at Ballarat in a very close race but did not race the Victorian Championship. They did however win the Championship Senior Four. Frank raced in the four in the weeks leading up to the race but was replaced when the Intercolonial Champion Herb Davis returned to the crew.

He had made his mark on the senior ranks.

In 1896, he raced in the two seat of the Intercolonial eight which won on the Parramatta River on 16th May defeating NSW and Queensland. This would have undoubtedly been the highlight of his rowing career.

In Frank’s last season 1896-97, he was successful in both the Champion Four and Champion Eights. 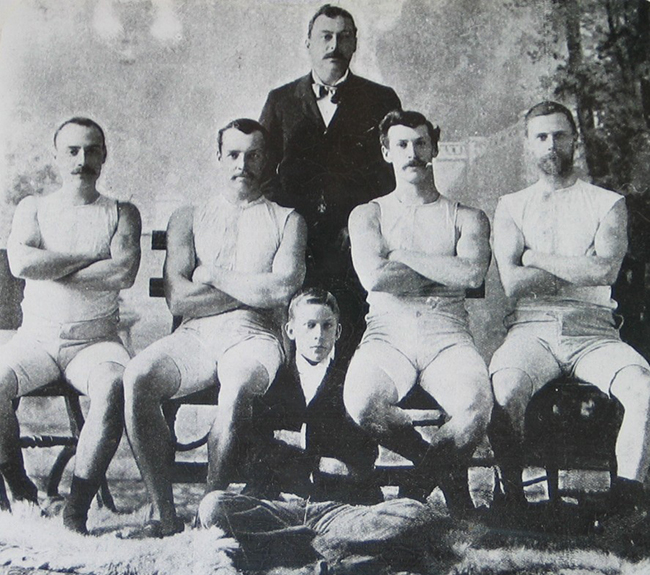 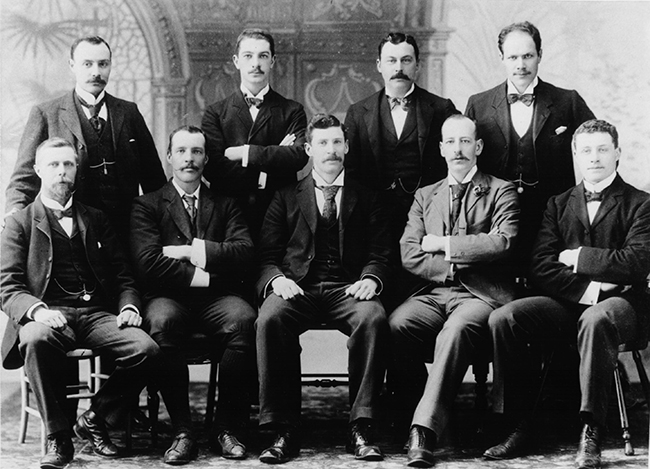 Frank’s administrative career at the Club began in the 1893-94 season when he acted as Honorary Treasurer. He obviously impressed the members as he was elected Captain in the following season and held that position until the end of 1898-99 season. It was through this time that Club broke through to senior success and also became a very successful Club.

One of the strategic decisions made at that time was to recruit two future leaders of the Club from Electric Telegraph Rowing Club. The Club history records Syd Edwards as the person behind the move but clearly Frank as Captain would have been a motivator and approver of this move.

A most significant event in the story of the club was the success of Syd Edwards in prevailing upon Alex Sloan and Stephen Morell to leave Electric Telegraph and join Mercantile. Sloan had won the Junior Pair for Electric Telegraph at Melbourne Regatta in the previous season and had rowed in the Inter-colonial Eight. Morell and Sloan had both rowed in Electric Telegraph’s winning Maiden Four at Upper Yarra and at Warrnambool in 1892.

Electric Telegraph had never been a particularly successful club. It had suffered a severe setback with the Greenlands fire in 1885, had no clubhouse of its own and had difficulty in maintaining continuity with frequent transfers of its members by reason of employment. It offered little future for men like Sloan and Morell. It looked like folding up, and, with the loss of its two outstanding junior prospects, it had little future success before it disbanded.

Despite some opposition from within the club, the two seat of the Senior Four, which had been rendered vacant by the transfer of Strelitz to Western Australia was immediately filled by Sloan as Edwards had planned. He fitted in splendidly. However, during the course of training Davis had to quit for a time and the crew thus lost its stroke. Frank Gibbs was brought up from the juniors into the two seat and Sloan moved up to stroke!

Simply the great success of the Club during this period of great economic hardship of the 1890s was in no short measure due to his Captaincy.

Greatly to the regret of your Committee, Mr Frank Gibbs has intimated he will probably be absent from Melbourne during the greater part of the coming season, and therefore desires to be relieved of the duties of Captain of the Club. Mr Gibbs has done so much for the Club and for the interests of rowing generally, and he is so widely known and esteemed that his absence from Melbourne involves the loss of services that can ill be spared. Your Committee recommends that Mr Gibbs be chosen one of the Vice-Presidents of the Club.

The high esteem in which Mr Frank Gibbs is held was shown by the large attendance of members at the Boat-house on the afternoon of 7th January, and by the enthusiasm which marked the presentation to him of a handsome tantalus spirit stand in recognition of his long and valued services to the Club. Mr Sloan, who made the presentation, said members keenly regretted Mt Gibbs’ retirement from the post of Captain, and indulged the earnest hope that at an early date he would see his way clear to again actively participate in the work of the Club.

Of the many family traditions associated with Mercantile the Gibbs family is the oldest, as not only Frank Gibbs’ nephew Allen, but also Allen’s son Peter, have been Mercantilians over the years. Frank Gibbs served the club not only as captain but also as treasurer, oarsman and coach.