Image from the Australian War Museum

John (Jack) Foster Gear was born in Adelaide on the 12th of August 1895. His parents were James and Sarah Jane Gear. He was also the third grandson of John Foster of Ballarat, who was a veteran of the Crimean War and the Indian Mutiny. His grandfather died in 1898 in a house fire in Doveton Street Ballarat and it is reasonable to assume that the family returned from Adelaide to live in Ballarat about this time.

They lived at 4 Humffray Street, Ballarat. His father, James Gear, was a chemist and Herbalist. He owned a well-known chemist in Sturt Street and the Gear name can still be seen on the building today. John was educated at Humffray Street Primary School and then attended Agricultural High School for his secondary education. He then passed the Melbourne University entrance exam in January 1912 and went to Golden Point State School as a trainee teacher.

John rowed at Ballarat City Rowing Club joining in about 1911-1912 but possibly rowed before that as a school boy at High School. The Agricultural High School rowed out of the Ballarat City shed from when it was first formed in 1911 until after the war. In 1913-1914 season, he was in the club’s lightweight eight and Maiden eight that were successful at Ballarat Regatta. He was also a well-known Harrier and won many medals for running. He was also involved in Senior Cadets while at school and the Citizen Forces and Volunteer cadets. He was the epitome of the all-round sportsman and team player. Had he not volunteered to fight, I have no doubt he would have been a champion oarsman and a key contributor to the club.

He enlisted on the 9th of June, 1915. He was aged just 20 years and nine months and still a student. He joined the 24th Battalion, 3rd Reinforcements as a Private. After six weeks at Seymour training he went straight to Lone Pine. He met up with another student teacher he had studied with at Melbourne University, Clifford Ellis. They both were taken on strength at Lone Pine in October 1915. He spent three to four months on the Gallipoli Peninsula before being invalided to Malta with diphtheria. 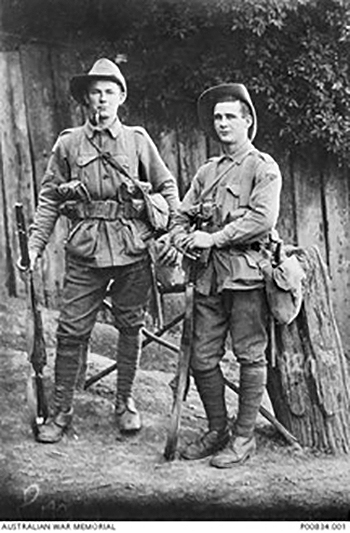 The image above was taken at Armentières, France, circa 1916. Portrait of 2036 Private Clifford (Cliff) Arthur Ellis and 2040 Corporal John (Jack) Foster Gear, both of 24th Battalion.
Ellis was awarded the Military Medal (MM) for action at Lone Pine, Gallipoli, on 6 July 1915 and Gear was awarded the Military Cross (MC) for his action at Hamel, France, on 31st July 1918. Lieutenant Gear was later killed in action during the battle for Montbrehain, 5 October 1918.3

Jack Gear returned to service in France in February 1916 and fought at Armenteries. He fought at Pozieres and was wounded in August 1916 and was invalided to England. The news was recorded in the Ballarat Evening Echo on 5th September.

Mr. J.A. Gear, herbalist, Ballarat East, received the news that his son John Foster Gear, was slightly wounded, and in 2nd Eastern General Hospital, Brighton, England. Private Gear is an old Humffray St.State schoolboy, and when enlisting was a student at Melbourne University, studying for Bachelor of Science. He was also a member of the City Rowing Club and holds the gold medal as champion athlete of Ballarat.1

The slight wound was actually a serious gunshot wound to his arm and shoulder that required hospitalisation in England. He returned to France on 3rd November.

The recommendation for John on the official form dated 15/9/1916 read:

For gallantry in action at Fleurbaix, Armenteries and Pozieres and the valuable work as NCO in charge of guides. He rendered conspicuously good service in the latter capacity on the night of the 4/5th of May when he located two platoons who had lost their way and guided them to their places under heavy fire.

For some reason he was never awarded this medal. He was promoted to Corporal on 24/12/1916 and was, however, Mentioned in Dispatches “for good gallant conduct in connection with hard fighting at Pozieres.”

In January 1917 he was chosen for Officer’s School in Cambridge and won a commission. He returned to France on 5th of May. He was elevated to Second Lieutenant 1/8/17. He became the Intelligence Officer for the Battalion and was promoted to full Lieutenant in September 1917.

It is possibly during the four months at Cambridge he met an English girl and became engaged. There is mention of a gift from his “fiancé” in a letter from his father James Gear enquiring about the return of his son’s effects which was written in 1919. It would have been a whirlwind romance and a tragedy that he never returned.

He was first recommended for a Military Cross in May 1918 for “conspicuous and gallant service while in command of Brigade Snipers. Opposite Albert from April 6th to May 1st he personally reconnoitred forward positions and supervised construction of sniper posts on exposed ground. Lieut. Gear by his example and fearlessness maintained a most aggressive spirit among his men, so that the movement by day an observation was denied the enemy and 57 known hits were scored.” He again, was not awarded a medal for this action.

He was finally awarded the Military Cross on 31st of July 1918 at Hamel. The recommendation reads:

For conspicuous gallantry and devotion to duty in charge of the brigade sniping section during and attack. He personally supervised the placing of his snipers on the whole brigade front, and throughout the day kept improving their positions. Under heavy fire he carried out reconnaissance in “No man’s Land” in order to secure more efficient fire for some of his section, and throughout the operations maintained the superiority of fire over the enemy.2

He was killed by a German sniper on the 5th of October 1918 at Montbrehain in the last 100 days of the war.

He is buried at the Ramicourt British Cemetery near St. Quentin in Row C, Grave No.16.

He is also commemorated with tree number 691 in the Ballarat Avenue of Honor.