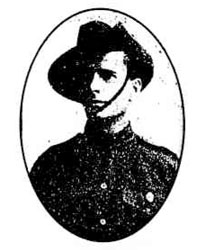 Garnet Victor Stanhope Gaylor, known as George, was a telegraph linesman and had rowed with Hosie in 1914 and with Boyd, McDonald and Hamilton in the Easter regatta in 1915. He enlisted on 5 July 1915 when 28 years old joining the 10th Light Horse.

He served at Gallipoli before being invalided home on 17 July 1916 due to 'rheumatism' and 'irritable heart'. He re-enlisted with the 8th Light Horse on 2 January 1917 returned to Egypt and was promoted to Sergeant.

On 4 May he was shot, through his steel helmet in the forehead and while initially thought killed, was taken to the hospital at Es Salt deeply unconscious and in a hopeless condition. When Turkish forces advanced on the hospital just hours later the A.I.F retreated and he was left behind,regretfully, unable to be moved. An Armenian nursing sister later informed his family he had died at noon that day.