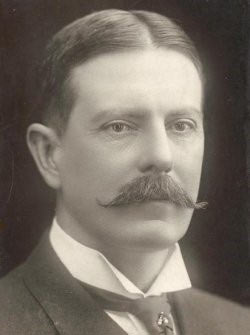 Sir George Fairbairn was a founder and inaugural President of Australian Henley, a regatta which brought great fame and support to the sport. He was also a distinguished President of the Association and the winning stroke of the very first Intercolonial Eight Oared Championship.

Fairbairn (1855-1943) was a pastoralist, politician, company director and oarsman, was born on 23 March 1855 at Newtown, Geelong, Victoria. He did not row at school as Geelong Grammar School had not yet created a boat club. He took up rowing at Jesus College Cambridge University but only at College level. He stroked the Melbourne eight against a Geelong eight prior to the Intercolonial contest in 1878. Sir George Fairbairn was a senator and also the Victorian Agent General in London. He was a founder of Henley on the Yarra and President of that organization from it’s beginning until his death. He was President of the Victorian Rowing Association from 1921 to 1924 and a Vice President until his death.