James was apprenticed to Robert Dean, boatbuilder of London, where he learned his trade. He became an excellent waterman whilst in London racing professionally.

He had developed into a successful oarsman, and his ambition was to win the Doggett's Coat and Badge, the blue ribbon of the Thames, competed for annually by the watermen who pulled the King's barge. He was unlucky, for in the year he was eligible to compete, there were so many entrants that a ballot was taken as to who should row. He drew a blank and so had to look on. He came to Australia in the early fifties, and in 1857 built a boatshed on the south bank of the Yarra, just above Princes bridge, and there he established his boat-building business, which eventually became the best known in Australia, and is still in operation. There, in that building, which became a landmark, were born to James Edwards and his wife seven sons and two daughters, and it is remarkable that it was not until November 13,1938, that there was a break, when the second son, Robert, died at the ripe age of 78 years.

Before Melbourne clubs could establish themselves, amateur rowing depended upon the boat builders to house and boat them. The most significant of the boat builders in Melbourne was James Edwards. He hosted the many early clubs in Victoria thus enabling amateur rowing in Victoria to develop strongly, far more than in other colonies. For example, when Banks commenced in 1866, they immediately hired boats and use of facilities from James Edwards. They commenced operations the weekend after their establishment meeting. He was the means by which amateur rowing flourished in Victoria.

He built the first racing eight in Australia which was launched on 23 October 1875 on the Yarra River. Due to the support of boat builders and in particular James Edwards, amateur rowing in Victoria was considerably more developed than in NSW by 1869. For example, the Victorian rowing season opened with ten clubs and 200 oarsmen staging a procession of boats. 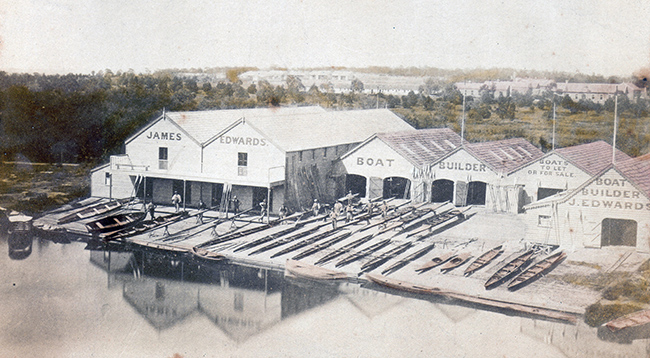 Edwards was also a notable sculler who raced in the first outrigger sculling race in Australia at the Darling Harbour Regatta on 9th April 1855. It is reported that Issac Howard won this outrigger sculling race from James Edwards, who had just arrived from England. Reports indicated that Edwards was badly fouled in this race. This was the first time outrigged boats had been seen and used, and they were much favoured. John Lang said that in Victoria there were no watermen who could compete with James Edwards. “He was the build of a sculler, and had a finished and powerful style.”

James Edwards stayed in Sydney for some time, and became coxswain of H.M. Customs boat. John Blackman, “Trident” of the Sydney Mail described the local scullers as very strong, but not clever, until they learned from the newcomers such as Edwards.

James Edwards had seven sons who assisted him in the business and many became fine scullers.