The following article on the Edwards Family appears in the Australasian (Melbourne Vic. 1864-1946), Saturday 19 November 1938 and provides an excellent summary of the boatbuilding family.

Some years before the discovery of gold in Victoria a lad named James Edwards was apprenticed to Dean, the famous English boat builder, and later became a Thames waterman. He had developed into a successful oarsman, and his ambition was to win the Doggett's Coat and Badge, the blue ribbon of the Thames, competed for annually by the watermen who pulled the King's barge. He was unlucky, for in the year he was eligible to compete, there were so many entrants that a ballot was taken as to who should row. He drew a blank and so had to look on. He came to Australia in the early fifties, and in 1857 built a boatshed on the south bank of the Yarra, just above Princes bridge, and there he established his boat-building business, which eventually became the best known in Australia, and is still in operation. There, in that building, which became a landmark, were born to James Edwards and his wife seven sons and two daughters, and it is remarkable that it was not until November 13,1938, that there was a break, when the second son, Robert, died at the ripe age of 78 years.

There has not been a boat race on the Yarra for very many years when there was not one of the Edward brothers present, and just as keen as the men were their two sisters - Mrs. Meredith and Mrs. Hodson. It was no unusual sight to see the seven brothers on the' top of the' bank along the Henley staging at the Head of the River boat race, and there they held court with old rowing men, companions and opponents. Almost every Monday morning throughout the year they met in Collins street to conduct family business, and they were as regular as the Town Hall clock.

Three of the brothers, Sydney, the eldest, Robert Dean (called after Dean, the English boatbuilder to whom James Edwards was apprenticed), and Fred, became professional sculling champions of Victoria. "Syd" won the championship from Greenland (also a boat builder of Victoria) and Ireland and Sullivan, of New South Wales. "Bob" defeated C. Messenger, the famous Sydney sculler.

Frank, who also had many sculling successes, was born on October 23, 1869, a date famous in the annals of Victorian rowing and of the Edwards family, for on that day was launched the first eight oared racing boat — clinker-built — ever turned out In Victoria, which James Edwards had designed and built.

Syd Edwards steered Scotch College crews to the Head of the River in 1872 and 1873, and held the rudder strings in 1874 when Wesley won its first race, from Scotch. He also steered the Victorian four-oared crew which won the Australian championship in Hobart in 1872. He was famous as a rowing coach, acting as mentor to Victoria, New South Wales, Tasmania, and West Australian crews at various times.

"Bob," the second brother, who died on November 13, was educated at Haw thorn Grammar School, but that was before Professor Irving established the race between Hawthorn Grammar School and Kew High School, a rival to the Head of the River race. When Edward Hanlan, the Canadian sculler, who held the world's championship, visited Australia 50 years ago, he chose Bob Edwards to row with him. At an aquatic carnival on the Albert Park lake, where Hanlan was the chief attraction, Bob Edwards caused a sensation by walking on the water in specially made boots.

Arthur, who steered Melbourne Gram mar school crews for four years, was coxswain of the winning crew in the Head of the River race in 1877, his brother Frank, steering Scotch College. He steered in his first race when aged only 8 years, and kept at it until increasing weight made it impossible for him to continue. He was also a good sculler and footballer, playing in the Melbourne team for four years.

Fred steered Scotch College to victory in the Sumner Cup and was coxswain for Victoria in the last intercolonial race in fours and the first three crews in eights. He also rowed behind W. W. Senior in the Grand Challenge in 1884 far the Victoria Club, and behind R. D. Booth for Melbourne in 1888, his younger brother, Bertie, being the coxswain on each occasion.

Charlie, who was educated at Haileybury, was also a well-known coxswain.

Bertie had a long record of successes as coxswain in Intercolonial and championship and regatta races and was also a sculler. 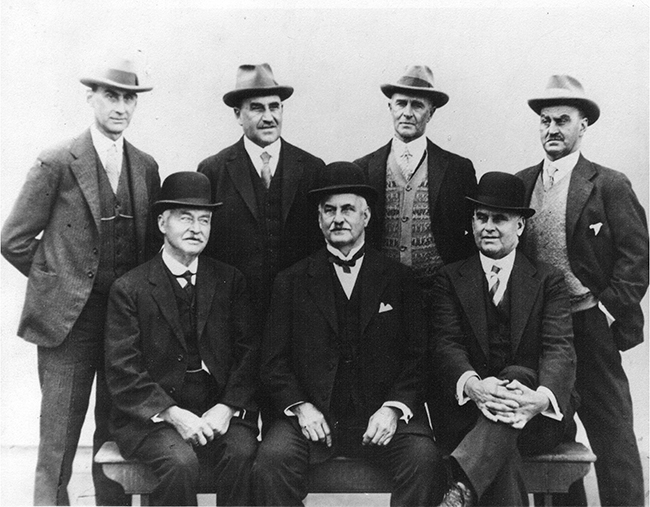 One of the most interesting exhibits at the 1880 exhibition in Melbourne was a display of the trophies won by the Edwards brothers, which made an effective show. When one of their sisters was married a gold goblet won by one of the brothers was used as a loving cup by the 80 guests and thus turned to a most practical use.

The three eldest brothers carried on the boat-building business established by their father under the firm name of James Edwards and Sons, and the old shed became a landmark on the Yarra bank. Until the new cut was made near the Botanic Gardens and the Henley course was established, the recognised upper Yarra course was from the Botanic Gardens to Edwards's boat house down-stream, or vice versa upstream.

The brothers have always stood for all that was best in boat racing, and their opinions and advice were sought and tendered on all matters of rowing importance. In all their activities Bob was the leader. He was a keen supporter of cricket, and football, in all things was the perfect sportsman, and he was the first to go.