The following is an extract from a boat naming ceremony at the club in 2003.

The Dobbie family have been a key part of the Mercantile history. Alex’s father, Arch, was a great oarsman and administrator of the Club. It is over 100 years since Arch joined the Club and almost 100 years to the day since Arch Dobbie rowed for Victoria. Arch Dobbie was Captain from 1908-1918 and then President for 22 years. He also held positions such as Treasurer and then President of the VRA and also the inaugural President of the Old Oarsmens’ Association. Arch was described as a quiet, wise and intently interested Mercantilian. This is the same description I would apply to his son and great Mercantilian Alex.

Alex has been closely associated with the Club for some 80 years. Alex began coxing Mercantile crews from the age of eight and continued until he went to Scotch College at the age of 12. He then rowed throughout his time at Scotch before rowing again for Mercantile when he joined the Club in 1934. For those doing the mental arithmetic, Alex is now 87 years old. Alex raced for Mercantile in maiden fours and eights and finally junior eights before he left for the War. He enlisted on 27th May 1940.

Alex was a pilot who flew Lockheed Hudsons, a plane provided to the Australians by the Americans. He left Australia in January 1942 with 6th squadron which was based at Richmond. He then was transferred to the 8th squadron based in Singapore where his active service was short due to the rapid advance of the Japanese. As the Japanese advanced, the RAAF’s Hudsons were depleted and the remanets of the squadron moved to Sumatra and finally to Java. Of the original 30 aircraft, only three remained. These three aircraft were then loaded with as many personnel as possible and the remaining people, including Alex, stayed. They were to be collected by the HMAS Perth but that did not occur. The Perth was torpedoed by the Japanese and sunk on 1st March 1942 with great loss of life. He and the others were captured by the Japanese.

Alex was sent to Changi prison for a day and a half before being transported in the hull of a ship to the Moulamein jail. Finally he was shipped in the hull of a Japanese troop carrier to work on the Burma railroad. He was one of the lucky people to survive this ordeal and was released at the end of the war in Thailand. Nearly one third of Australians POW’s on the Burma railway died. I might add that four Mercantile members died whilst prisoners of war at the hands of the Japanese. Alex was discharged at the end of the war at the rank of Flight Lieutenant. 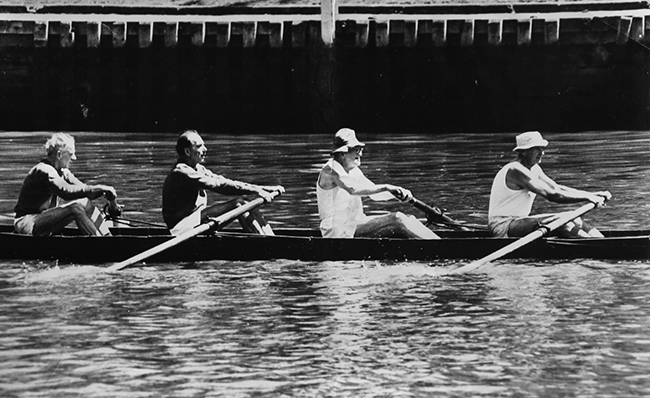 Alex rowing in his Sunday morning crew in the two seat

I have come to the conclusion that Alex must of dreamt of a Sunday morning row followed by a beer during this awful time because until a year ago, he has rowed every Sunday come hail, rain or shine. Such doggedness must have been borne out of such misery. However Alex tells the tale that upon his release from the Japanese after 3 years without a drink and no doubt in poor shape, he had some Thai whisky which left him with a massive hangover as well. Perhaps Mercantile was not in the fore front of his thinking at that time. It was just before that absence that the Club decided that another boat should bear the Dobbie name.