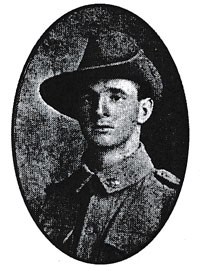 William Deam enlisted in March 1915 a couple of months before his cousin and fellow rowing club member John Deam.

William was another of the rowing club members who was discharged as being medically unfit for poor chest expansion and then being accepted on his second attempt and was sent to Gallipoli. On 29 November his company reached the tunnels on Plateau Sap (Lone Pine) where they took shelter when a shell burst burying six of the group including Deam.

Under fire they attempted to rescue the men but were not successful for all of them and when the men were relieved and off the front line Deam was missing at roll call. An enquiry on 21 January 1916 determined that he had been killed in action on that day at Gallipoli. His body was never recovered.