At the foot of this profile is a tribute from James Lowe, President of Banks Rowing Club. 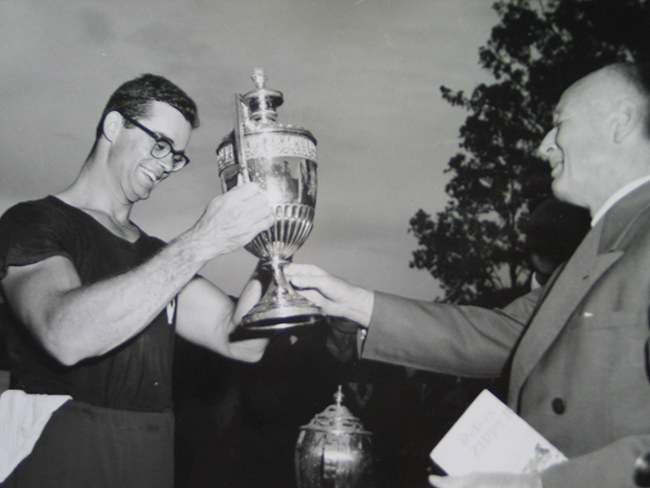 Terry Davies being presented with the King's Cup in 1963

Terry won his first maiden eight in 1951 whilst rowing for the University Club in Perth. He was selected into the 1954 Western Australia King’s Cup crew which finished fifth. He won the WA Champion Pairs in 1955 with Dick Kernot and coxed by future Perth Lord Mayor Peter Nattrass. He blossomed in Melbourne under the tutelage of Alan Jacobsen stroking two winning King’s Cup crews, rowing in two Olympic Games and in the first World Championships. He was a very strong oarsman.

Tribute from James Lowe, President of Banks Rowing Club, written upon the death of Terry in 2022.

Terry Davies, who was a highly respected oarsman and honoured Life Member of Banks Rowing Club, sadly passed away on Sunday 31 July 2022.

Terry grew up in India where his father was a policeman.  Terry was in Mumbai during the World War II when it was bombed by the Japanese.  He recalled going out into the street after one such bombing only to see bodies being loaded onto a truck – a traumatic experience for a young boy.

Terry commenced his rowing in Western Australia, winning his first maiden eight in 1951 whilst rowing for the University Club in Perth. He was selected in the 1954 Western Australia King’s Cup crew that finished fifth.  It was at the 1954 Intervarsity Regatta that Ian Douglas indicated to Terry that Terry’s future in rowing would be best served by moving to Victoria.  It would be a few years before Terry made the move. The following year he won the WA Champion Pairs with Dick Kernot and was coxed by future Perth Lord Mayor of Perth, Peter Nattrass.

In late 1960, Terry transferred from MUBC to Banks Rowing Club along with Paul Guest and Ian Douglas.

Terry, with encouragement from Ian Douglas, pioneered the use of weightlifting as part of rowing training, often doing it in secret as it was very much frowned upon by Bob Aitken (coach of 1956 Victorian and Olympic Games Eight) and other selectors at the time. Terry was immensely powerful, and still continued to undertake daily training into his 70s.

The Australian Eight (closest) winning the gold medal from New Zealand and England (out of picture) at the 1962 British Empire and Commonwealth Games.

In the 1962/63 season Terry stroked the Senior Eight winning numerous regattas. He would later go onto stroke the winning Victorian Kings Cup crew on the Toowong Reach in Brisbane. Terry won the club’s Pat O’Connell Trophy for the most outstanding oarsman in 1963 (and also 1964) as well as the Selector’s Trophy.

In the 1963/64 season Terry again stroked the club’s Senior Eight. The Banks Senior Eight won the State Championships by a canvas, and in doing so Terry and five members of the crew (Brian Vear, David Ramage, Paul Guest, Charles Lehman (emergency) (all later to become Life Members) along with Kevin Wickham (cox), were selected in the Victorian Kings Cup crew with their coach being Alan Jacobsen.

Prior to the Kings Cup race, Jacobsen gave the crew a pep talk. Paul Guest, who was five in the crew, asked Jacobsen “what are we going to win by?” Jacobsen’s reply was a very firm “clear water”.

The 1964 King’s Cup race itself was a cracker with two top notch crews from Victoria and NSW fighting it out on the Nepean River at Penrith for the right to be the Olympic crew. After a false start, starter Ossie Rosevear, the starter, brought them back to start line with the words: “That’s history, now let us try that again.” No one ever knew who broke the start.

The Victorians flew off the restart gaining a ¾ length lead by the 500 metre mark. They withstood several major challenges from the favoured NSW crew, with their cox repeatedly ringing their bells (as there were no speaker systems in those days) to indicate to call for a 10 stroke effort. On each occasion the Victorians waited five strokes before Kevin would ring their bells and then do their effort, which would push them back out to a ¾ length lead, which they could not break. With Kevin’s “stentorian voice” booming through his megaphone, the Victorian crew would go onto win by ¾ of a length. Following their exciting victory the crew was greeted with the opening words from Jacobsen “What went wrong?” as it was his expectation the crew would win “by clear water”.

The Victorian crew, with Kevin as cox and with four other Banks members and Jacobsen as coach, were selected to represent Australia at the 1964 Tokyo Olympic Games. Unfortunately the crew had a sub-standard boat and did not make the final and would go onto come second in the B final, and 8th overall.

It is noteworthy, that on behalf of Rowing Australia, Andrew Guerin said when reporting on the passing of Kevin Wickham. “From the late 1950s, there had been a revolution in boat design with heavy flat keeled boats being replaced by shapes resembling those of today. Australia had been left behind with the new designs which were assessed at the time as being 25 seconds faster than the Australian boats.

As an experiment with nothing to lose in the B final, they borrowed the American’s spare Donoratico eight. With only the row to the start to come to grips with the new boat, they struggled. Stroke Terry Davies fell off his seat, the pin moved in the four-seat meaning David Ramage could not row hard and the boat rocked from side to side. They were last at the 500, second last at the 1000m and finally figured how to race it in the final 500 metres. They came through the field like a steam train, finishing a close second. Kevin’s opportunity of medalling with a quality crew was sadly lost to poor equipment”.

Terry continued race for the club competing at nearly all regattas winning the Victorian Senior Eight Championship in 1965 and 1966 and was instrumental in the club winning the Senior Premiership in 1966.

Terry’s Interstate and International record is as follows:

In 1966/67 season Terry was Club Captain and the Club’s representative on the Victorian Rowing Association. He last competed at a Senior level in 1968 and then through to 1978 coached at the Club and at Caulfield Grammar School, coaching the 1st Eight for a number of years. He also served on the Committee and as a Selector.

Terry made a come-back to rowing in the 1980s and competed in various Veterans (now Masters) races at regattas. I had the pleasure of racing with Terry in a number of Masters races.  He was quietly spoken, very determined and a fierce competitor. He last competed at the 1995 Australian Masters Games winning a number of gold medals. Following that he trained regularly with Brian Vear in a pair, but no longer competed.

In 1999 Terry was made a Life Member of Banks Rowing Club and I had the great pleasure in presenting Terry with his Life Member’s plaque a few years ago when Terry was last at the Club.

Terry worked at the Melbourne titles office for many years.  In 2011 he was inducted into the Rowing Victoria Hall of Fame as part of the 1962 British Empire and Commonwealth Games gold medal winning eight.

Terry’s loss is deeply felt by those remaining from his crews of the 1960s, club members and others in the rowing community who were inspired by him and by those he coached. He was a gentleman who loved the sport of rowing and the Banks Rowing Club.

The Banks Rowing Club laments the passing of Terry and extends to his family our condolences and gratitude for his devotion and contribution to our sporting history.