Ken Cusworth joined Banks Rowing Club in 1925, and, within a year, was in a maiden fours crew, in the maiden eights at Henley, and was soon into junior ranks. Two years later, he was in the senior class. Serving in the army in the war years, and finishing with the rank of captain, his training fitted him for administrative work; he soon became involved with the V.R.A. His administrative work for both his Club and the Rowing Victoria was outstanding. He was a Vice-President of the Victorian Rowing Association from 1978 to 1981.

Manager of the King's Cup crew in 1968, he saw his sons follow in his rowing footsteps; and it must have been a proud moment in his life when he coached his son Robert and Jeff Hardie in the State Senior Pairs in the National Regatta in 1974 at Ballarat. At an age when most oarsmen gently scull on Sunday morning, Ken stroked a Banks veteran eight in the Head-of-the-Yarra in 1972. Ken was an outstanding stroke in his time. 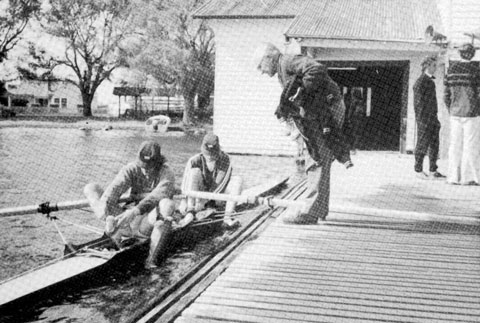