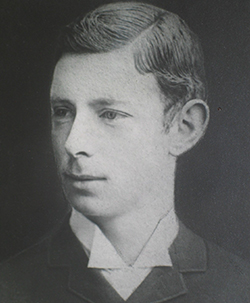 The image to the right is of Cunningham as a young Captain of Mercantile Rowing Club.

Charles S Cunningham was the Mercantile Rowing Club’s first inter-colonial representative being the five seat of the winning 1890 Victorian crew. He was also to be an Olympic selector in 1912 and also was a person behind the organisation of the 1919 Peace Regatta.

The obituary in the 1938-39 Mercantile Rowing Club annual report follows:

The passing of C S Cunningham has taken yet another of the men who were responsible for laying for the Mercantile Rowing Club the foundations on which todays successful organisation was built. He was one of the body of enthusiasts, who in 1885, prepared the site of the present boathouse, when it was a swamp. The outstanding personality and ability of Mr Cunningham made it inevitable that he should take a prominent part in the development of the Club. He was a member of the first crew to win a maiden eight for Mercantile, as far back as 1885, and by rowing in other successful crews helped to establish the Club’s prestige in regatta racing. he was Captain of the Club during the years 1889-94. For many years he was a contributor to the “Argus” and “Australasian” and by his shrewd comments and constructive criticism rendered fine service to rowing.

One of the activities which gave him a great deal of satisfaction was his association with the AIF crew, which won the King’s Cup at Henley Royal Regatta in 1919. He did good work in the organisation of the two crews which represented Australia in this historic race. Despite advancing years, Mr Cunningham continued to take an active interest in rowing till the time of his death, and he attended most of the Club’s fixtures in recent years.

So passes another link with early Victorian rowing and the Mercantile Club.

C S Cunningham is often referred to in the early part of the Mercantile Rowing Club history.

C. S. Cunningham, having taken over from Boyd as captain in 1889, did not win any further races for the club, but had the honour of being the first club member selected to represent the colony of Victoria in the Inter-colonial Eight in the 1890 Season. Cunningham was to gain further distinction in later years when he was appointed one of the three Olympic selectors and accompanied the Australian Eight to the Stockholm Olympic Games in 1912.

His obituary in the Australasian on Saturday 11th February 1939 page 19 provides an interesting account of his life.

MAJOR CHARLES S. CUNNINGHAM, who died after a short illness on Sunday, February 5, was one of the best-known men in the Victorian rowing world for very many years. He was captain of the Mercantile Rowing Club from 1889 to 1894, succeeding W. S. Boyd, who held the position from 1880-1888. He won his first race, the junior pairs, at the Melbourne regatta in 1882 with V. F. Mason as stroke, and the friendship then established remained until his death. He rowed No. 7 in the Victorian crew which won the inter-colonial race on the Parramatta River (N.S.W.) on November 29, 1890. The stroke of that crew was Bob Nicolson, also a close friend.

He was one of that group of rowing enthusiasts led by Sir George Fairbairn, the late Mr. A. R. Blackwood, and Captain W. C. Rivett, who established the Henley-on-Yarra regatta in 1904, on similar lines to the Royal Henley-on-Thames regatta, and he was for very many years one of its officials.

Mr. John Lang, in his history of rowing, "The Victorian Oarsman," writes:-"In 1897, through the energy of Mr. C. S. Cunningham ("Tingle' of 'The Australasian'), the Governor of Victoria, Lord Thomas Brassey, and wealthy men joined with enthusiasm to send a crew to London. Unfortunately the project fell through." In 1910, he revived the proposal and approached Mr. Guy Nickalls, England's famous amateur oarsman, with a view to arranging for an Australian crew to compete at Royal Henley-on-Thames. There were many obstacles to overcome, but when Charlie Cunningham took anything in hand he was not easily deterred, He wrote articles in "The Australasian" and never lost an opportunity of pressing his proposal. Eventually he triumphed, and in April, 1912, the first Australian crew sailed from Melbourne. He was one of the organising committee and a selector, and his enthusiasm led to his accompanying the crew to England at his own expense, as assistant coach. Australia won the Grand Challenge Cup at Royal Henley and competed in the Olympic Games regatta at Stockholm, being beaten by the famous Leander Rowing Club crew. He was delighted, for the eight had proved conclusively that the standard of rowing in Australia was as high as he had always thought.

He contributed the rowing notes to "The Australasian" for many years under the pen-name of "Tingle," and his column was regarded by rowing men all over the world as authoritative and informative. He was a man with strong opinions, and had the courage, at whatever cost, to express them and to provide constructive criticism. A few years ago he contributed a series of articles on famous shipwrecks to "The Argus."

Charlie Cunningham, who was born in Hobart, joined the staff of "The Argus" when quite a lad, and served his paper in many capacities until he resigned to engage in shorthand work at the Law Courts. His ability as a shorthand writer was so well regarded that judges accepted his notes as correct, and they were recognised as such by the Court. He was specially engaged in many most important arbitrations after the collapse of the land boom, and his promptitude and accuracy earned for him a reputation which was unrivalled. The first big case in which he was so engaged was, I think, the inquiry into the affairs of Trinity College in 1890-91, when there was a revolt of students and an investigation of all the circumstances by a committee of the general assembly of the Anglican Church.

Although aged 50 years, he enlisted for service at the outbreak of the Great War, and served in Sir John Monash's brigade.

After service in Egypt he suffered a serious illness. When he recovered he was taken on the headquarters staff to organise and administer a postal service for the whole of the A.I.F. On his return to Melbourne he was appointed to establish and control the repatriation system for Victoria. When this work was established he retired and resumed his work at the Law Courts.

In recent years he had confined his activities to business concerns in which he was interested. He was a director of several companies.

Major Cunningham was one of four brothers, Sir Edward, for many years editor of "The Argus," and Messrs. Robert and Roland Cunningham, well known in musical circles and on the operatic stage in London. He was him self an excellent singer, with a strong, resonant baritone voice, which was frequently heard in the cause of charity and at the Melbourne Savage Club, of which he was one of the earliest members. He was one of that talented company of amateurs which formed the Lyric Club in the early 'nineties, and produced "The Pirates of Penzance" at the old Bijou Theatre. I fancy he played the part of "The Pirate King."

Charles Cunningham was one of those men who had a very wide circle of friends, who admired his good fellowship, envied him his great strength, and appreciated his enthusiasm for all that he touched.

His physical strength was remarkable, and I can recall him, as a member of the Young Victorian Patriotic League, gathering round him a number of rowing comrades and quelling a hostile election meeting at East Melbourne. It was in the Trinity schoolroom, and a number of larrikins from Collingwood set themselves out to break up the meeting. The Y.V.P.L. was muscular as well as patriotic, and Charlie Cunningham stood it for a while, and then one by one threw the interjectors out into the night.

On one occasion be engaged in a wrestling competition in a railway carriage which lasted for nearly three hours, while the train travelled from Sale to Warragul. It was one of those old second-class double saloon carriages, with a partition across the centre, about 3ft. 6in. high. He was returning from a regatta at Bairnsdale, and, when a friend entered the carriage at Sale a discussion arose as to strength. A challenge was thrown out and the wrestle began, each trying to put the other over the partition. It ended without result when Warragul was reached for dinner. When the meal had been enjoyed and the journey resumed it was suggested that, the contest should continue, but the competitors had had enough. One of the party, a St. Kilda footballer, anxious to see some more fun taunted C.S.C. with not being game. "Why," said he, "you could not pull me over." That was too much for the strong man, and lunging across the partition, he seized his tormentor by the scruff of the neck and with one hand swung him high over the partition. Arms, legs, and curls were in the air as the footballer subsided. He had not realised the strength of his opponent.

In 1912 he rowed an open sculling boat, with sliding seat, from Princes Bridge to Twickenham and back - about six miles-towing a full American bucket with a bridle attached to the outriggers. He was then aged 47 years, and lost 91b. weight during the ordeal, which lasted five hours.

Strong man, oarsman, kindly hearted congenial companion, and excellent raconteur, Charlie Cunningham has gone to his last rest, and there will be many who will miss his cheery greeting and his enthusiastic outlook on life.