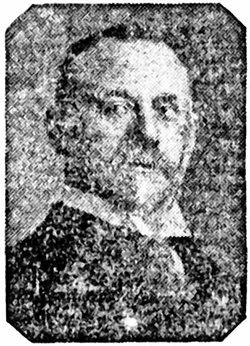 The Illustrated Sydney News gives some particulars concerning a well-known Tasmanian rowing man, but who was captain of the North Shore rowing Club, Sydney: —

Mr T. E. Creswell, the captain of the Club, is a native of Tasmania, and is a solicitor, practising his profession in Pitt Street, Sydney. He left Hobart (his native city), where he had been in practice for six years previously, in the year 1880, to reside in Sydney.

Mr Creswell has long been identified with rowing, being one of the founders of the Derwent Rowing Club in 1872, the first institution of the kind ever started in Tasmania.

He was, from the time of its foundation until he left the colony, an active member of the last named Club, and was for same time a member of the committee.

Mr Creswell joined the North Shore Rowing Club in 1883, being immediately upon joining elected on the committee, where he has served ever since, the last three years as captain.

To Mr Creswell, with Messrs. P. O. Williams and H. H. Robey as co-workers, is due the so far successful opposition to the St. Leonards Wharves Bill, which, if passed, would have been the means of disbanding the Club, as no suitable site was available. The latter difficulty has been overcome, the Club having, through their captain, arranged for a lease from Mr John Milson of a site in Careening Cove, not far from the present position.

Mr Creswell has not been a 'feather bed soldier' in the aquatic world, having started for over fifty races in eight, four, and pair-oars, and double and single sculls.

The following are some of the races in which he took part : —

1884— Newcastle Rowing Club Regatta, four-oared, open to other clubs (swamped almost on the post when leading)

Mr Creswell also possesses trophies won at the High School sports, Tasmania, 1874, and 1875, as the winner of the Old Scholars' Cup for running three distances, and also two trophies in connection with the

Southern Tasmanian Volunteer Artillery, of which corps he was for some years a member.

Mr Creswell has been for some time a member of the committee of the N.S.W. Rowing Association, aud this year, besides representing the Club as a delegate is an elected member of such committee.

He also holds the Royal Humane Society's medal for saving life in 1886, and no later than the 17th of November last he was instrumental in rescuing four young men who were capsized from a dingy off Bradley's Head.

A further glowing report on Mr Creswell was published in the Daily Telegraph in Sydney on 9th August 1904 on page 7 as follows.

Mr. Creswell, the new Liberal member for St. Leonards, was born in Hobart, Tasmania in 1852, and is the son of (the late Thomas Creswell, accountant in the offices of Messrs. Nutt and Butler. He was educated at the Central School, and afterwards at the Collegiate School, where he took a senior scholarship. Subsequently he went to the High School which was then under the rectorship of the late Rev. Poulett-Harris. Mr. J. C. Maynard, formerly Under-Secretary for Public Instruction in New South Wales, was at the time mathematical master at the school. Mr. Creswell left the school in 1867, and entered the office of Mr. Charles Elliston, as junior clerk. Here Sir John Dodds, the present Chief Justice and Administrator of the Government of Tasmania, and Mr. Creswell were fellow clerks for some years. Mr. Creswell obtained the degree of Associate of Arts in 1868, and was articled in 1870. Four years later he was admitted attorney, solicitor, and proctor in Tasmania, and he practised in Hobart until 1880. He the came to Sydney, and, entering the office of Messrs. John Dawson and Son, solicitors, as managing clerk, was admitted solicitor in New South Wales after three months residence. He left Messrs. Dawson and Son and commenced practice 0on his own account, and during the last two years and a half he has been the senior partner in the legal firm of Creswell and Whatmore. He is a well-known and popular resident of the North Shore where he has held many public and semi-public positions. For the last four years he has been an alderman of the North Sydney Council, and for 21 years he has been a member of the North Shore Rowing Club, of which he has been the captain for 18 consecutive years. He is a vice-president or tlie Royal North Shore Hospital, and ever since its formation he has been the honorary treasurer of the North Sydney Benevolent Society. In his younger days he took a great interest in athletics, particularly in ama teur rowing, and he holds many trophies for rowing, running, and shooting. His qualities as a swimmer have enabled him to save several lives from drowning, and he possesses the certificate of the Royal Humane Society for life-saving.

However not all went smoothly for Thomas Creswell. In 1912, he was struck off the solicitors roll after failing to manage the finances of clients. In 1914, he was subsequently permitted to be employed as a law clerk as he had been unable to find other satisfactory employment since being struck off the roll.

The Daily Telegraph on 7th January 1920 noted the death of Thomas Creswell noting that he was member of State Parliament and a local Councillor. The article advised as follows:

Mr. Thomas E. Creswell, who some years ago sat for St. Leonards in the State Legislative Assembly, died at his residence, Alfred Street. North- Sydney, yesterday morning. Deceased, who was in his 66th year, was a native of Tasmania, where he was admitted as a solicitor. He practised for some years in Sydney, and almost up to the time of his death was connected with Mr. E. R. Abigail's office. Mr. Creswell, in the earlier days, was associated with the municipal affairs of North Sydney, and for a period was a member of the local council. He leaves a widow and one daughter.