John Clark came to Mosman from Sydney Grammar School, and finished his career with two Olympic Games, two King's cups, several state titles and a trip to the world championships.

From a tub four as a 15 year-old to the 6 seat of Grammar's eight, John spent two years in the school's top crew. Their best result was a third, but getting to know Ian Ballard also proved a winning move. After John's final year of school in 1965, Ballard talked him into joining Mosman. While studying Agricultural Science at Sydney University, John enjoyed two years of rowing in junior fours and eights in the prawn suit. In 1967 Mosman's junior four won the NSW Championship. They were Peter Johnman, Nick Padol, John and Ian Ballard (stroke) and Richard Bruce (cox). 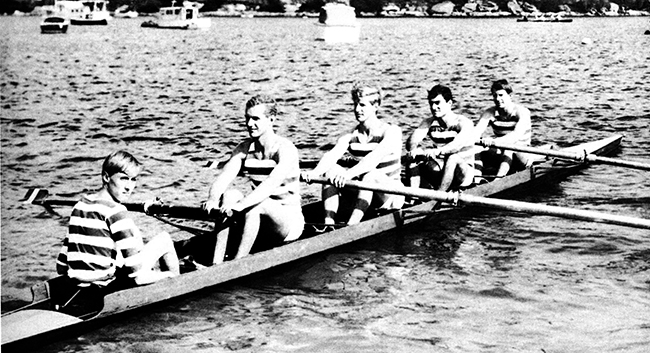 In 1968, ‘Clacker’ as he was known, was 20 years old and in his first year as a senior. He joined Bob Shirlaw and cox Andy Hunt to win the state coxed pair. Mosman coach and NSW selector Bruce Evans pushed hard for John to be selected in the state eight.

I didn't expect to be in the NSW eight,' recalls John. ‘I wasn't in the best of fitness, but then I trained my arse off ... '

The NSW crew won the King's Cup by about a length over Victoria.

The Mexico Olympics was looming, and it looked as though the NSW eight would be there. Well into the train-on period the national selection panel decided to add to the squad. Bob Shirlaw and David Douglas (Mercantile) were included, and close to departure 'Clacker' and John Nickson were named as emergencies. But apart from competing in a pair with John Nickson in a lead up regatta, the Australian emergencies were not needed.

I watched the eights final in Mexico from the bank. We were a very strong crew-very powerful. Mexico suited that crew and the way they raced. Stroke Alf Duval tended to take off steady and then wind it up with 1200 to go. This proved to be the right way to row an altitude race, and they rowed very well. The Kiwis went out very hard from the start, and paid for it.'

In 1969 John and Bob Shirlaw won the state coxed pair for Mosman with cox Andrew Hunt. John was back in the NSW eight, but calls it a minor debacle. 'We didn't train hard enough. As far as water training was concerned we did about a twentieth of what we did in 1968. We did a start a day or two before the race at Bundaberg, and the Vics trounced us.'

One of the greatest years in MRC's history was 1970. The Bruce Evans-coached four of Ian Ballard, Malcolm Shaw, John and Bob Shirlaw won Mosman's first national championship since 1966, edging out Victoria by 0.6 of a second on the Nepean.

The 1971 NSW eight came third, but five out of that boat went into the following year's crew, with explosive results.

'We were terrific out of the blocks. Nobody seemed to be able to match us,' says John, who had gone from the 5 seat back to the 3 seat.

Victory on the Huon River in March of 1972 earned John another Olympiad. But the lead up to these Games were marred by tragedy for the Australian team. The 6 seat of the eight, Ian McWhirter, was diagnosed with cancer and passed away shortly after the Games. A member of the four, Brian Denny, was electrocuted not long before departure. At the Olympic regatta Australia had the two minor medallists in their heat, won their repecharge, but were outclassed in the semi­-final. The Kiwi eight was the crew of the regatta.

'A real crew to be admired,' says John. 'They were real racers. They got their half length lead by 500 metres and kept steaming ahead.'

The Munich Games were, of course, blighted by terrorism, but in one small piece of good fortune, by then the rowing was over and the crews long gone from the Games village.

In 1973 John played first grade Rugby Union for the University of NSW-later relegated to second division ­ and pursued a new passion for Scuba diving and Marine Science. In 1974 he returned to rowing at Mosman.

In 1975 John won the coxed pair at the National Championship with Mike Crowley and Terry O'Hanlon. John and Mike were also the stern of the title-winning four, with James Taylor and Bryan Weir in the bow.

The coxed pair went to the World Championship in Nottingham. They went out in the repecharge. 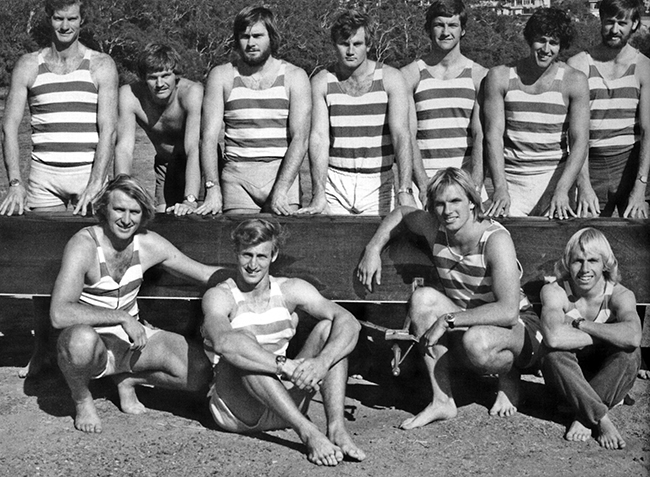 Having already taught and coached at Cranbrook and St Josephs, in 1978 John began teaching at Shore alongside Bob Shirlaw. He spent his last rowing season-1979-with Drummoyne, where the renowned Rusty Robertson was head coach. John says Rusty's reputation is well founded.

'He was able to pick me out and combine me with someone that I'd never rowed with-someone I'd never even seen. And we'd just click. It was so level it was like sitting on a park bench.'

It wasn't a bad way to finish his career. By 1980 John and his wife Sue were on the move to the bush, settling on the family farm at Coolatai, just north of Warialda.

John loved Mosman, especially his junior years. He became good mates with Mike Crowley and Terry O'Hanlon and even firmer friends with his old schoolmate Ian Ballard, who he believes was an under-rated stroke.