Ernest was a leading sculler and administrator of rowing in the Bendigo region pre WWI. He may well be the first Bendigo oarsman to have competed in the Victorian Championships. At and before the turn of that century, most region clubs competed against each other rather than at the State level. In the case of this region, the Bendigo, Sandhurst, Eaglehawk, Seymour, Cobram, Shepparton and Echuca clubs formed part of the Northern District Rowing Association and organised their own competitions.

1909 - Competed in the Victorian Sculling Championship as Sandhurst Rowing Club and finished third - as previously mentioned, probably the first Bendigo entry in the State Championships.

1909 Nov 3 - Christie organised the sporting program for the opening of the 1909-10 Eaglehawk Rowing Club season. The Bendigo Independent reported on 4th November 1909 that Christie was a fine sculler who had achieved much success and had recently performed well at the Victorian Championships.

1910 - Won the senior scull at the Victorian Rowing Association Regatta on the Yarra on Saturday 3rd December 1910. 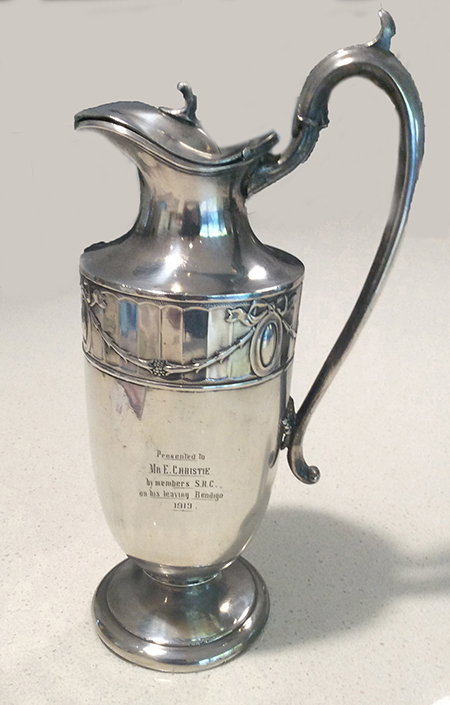 His work for Sandhurst Rowing Club must have been substantial as the members presented him with this superb claret jug when he moved to Melbourne in 1919. 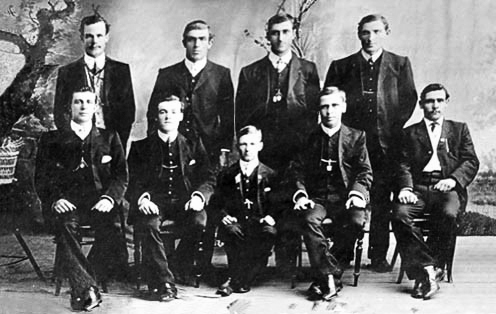 Sandhurst Rowing Club members with Ernest Christie back row second from the right. Also in the back row on the left is his best man Robert Lightfoot. 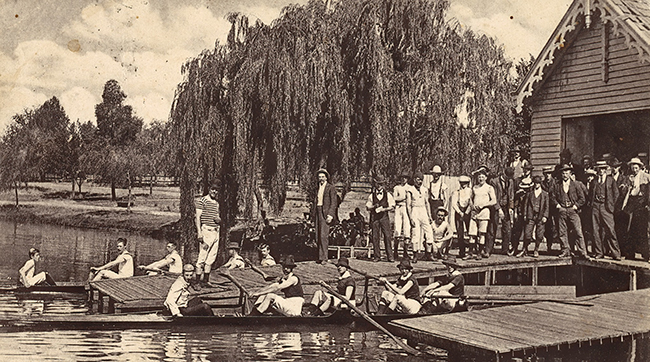 The Bendigo Clubs in 1906 - photo from State Library

He was born at Carlton on 28 Feb 1884 to Grace Duro Cristy (unmarried). He was adopted by his grandmother Susan Charity and (step) grandfather Ernst Christie. Hence the confusion over the spelling of his surname. Ernest lived at Leslie St. Sailor’s Gully (Eaglehawk) until he got married in 1914 and was living there when his grandmother died. He then moved to Bayne St. Bendigo.

He was originally employed in one of the mines at Long Gully, but later on became a tram driver (motorman) in Bendigo. He was at one time a Vice President in the Bendigo Tram Union, which he continued on with in Melbourne. His employment in the mines may have arisen from his friendship with Robert Lightfoot. Robert's father John was a pioneer mine manager in the Eaglehawk district.

Compiled by Andrew Guerin from materials provided by Brian Anderson, a grandson of Ernest Christie.
August 2020