Peter was born about 1832 and by the 1850’s was working as a clerk. He and his brothers Owen and Charles rowed as gentlemen with the Albion Rowing Club on the River Lea in England. In August 1855 they rowed in the Gentlemen’s Four-oared race at the Royal Thames Regatta and eldest brother Charles won a sculler’s race. Early in 1856 Peter and Henry Cazaly left England and arrived in Australia, while their mother and youngest children stayed in England. The two youngest brothers Owen and John continued rowing and won a Gentlemen’s Junior four-oared race for Albion Rowing Club in 1856. They also left for Australia later in 1856, followed by their mother Elizabeth and her three youngest children in 1857. The Cazaly family made their way to Ballarat where son Henry took up land at Weatherboard near Lake Learmonth in that same year. By 1859 the family had relocated to Ballarat and had a cottage in Drummond Street. They were perfectly placed to become involved in the developing cultural, civic, business and sporting pursuits of Ballarat especially rowing.

Peter was involved with the Kohinoor Company mine in 1860 and in 1862 is recorded as having married Eliza Waters. They had eight children the first being a son, also named Peter born in 1863. Peter Senior was the first secretary to the Benevolent Asylum from 1868 until his retirement in 1883. He was also involved with music scene in Ballarat being an amateur singer of note with a fine baritone and a member of the Ballarat Ledertafal. In 1876 his occupation was given as music teacher and his address was Soldiers Hill. Peter was also recorded as the prime mover for the acquisition and dedication of the Alfred Bells, in connection with that “dastardly attempt” on Prince Alfred’s life. These bells still ring out from Ballarat’s Town Hall today.

Peter with his brothers James, John and Owen could justly be described as the first family of Ballarat rowing as they were all involved in the very early regattas. It was reported in that the Cazaly men did not have a cradle as babies but slept in a small replica of an outrigger four and teethed on a miniature oar! They were also instrumental in setting up the first cricket club and played in the early Ballarat cricket matches. James is listed with the leading oarsmen of the day in John Lang’s ‘Victorian Oarsman’. It says of him: “In the opinion of many the best man on the river, either as a sculler or an oarsman. In sculling he looked a picture of strength properly applied to the propulsion of a boat.” James Cazaly was the grandfather of football legend Roy Cazaly. Roy also rowed early in his sporting career but gave away rowing to concentrate on football. He did however inherit his grandfather’s sporting prowess.

Owen Cazaly recorded his first race and his first win at Ballarat and District Regatta held at Lake Learmonth in 1863. He teamed with Edward (Ned) Williams to win the amateur double sculls. In 1864 the Cazaly brothers competed in the first ever races held on the May 3rd on the newly established Lake Wendouree as members of the newly formed Ballarat Rowing Club. They competed against one another in pairs and sculls. In 1864 the newly formed Alabama Rowing Club defeated a Ballarat Rowing Club four comprising Peter Cazaly (bow), John Cazaly(2), Ned Williams(3) and James Cazaly stroke. Ned Williams and James were also entered in Senior pairs which was a no race. However, Tom Cotton, who wrote a brief history of Ballarat Rowing Club, lists them as winners!

1864 was also the occasion of the first four-oared race held on Lake Wendouree on September 9th between the members of the Ballarat Rowing Club racing in two boats - the Cosmopolitan and the Atlanta. Owen Cazaly stroked the crew that came second. In 1865 Peter, John and James again teamed up with Ned Williams to win the Senior four-oared gig at Ballarat Regatta on February 10th. This was the very first Ballarat Regatta held on Lake Wendouree. James also won the Senior sculls by virtue of a row-over and John also scored his second win in the Maiden four-oared race rowing for the Ariel Club! Brother Peter stroked the Ballarat club to second place in the same race. Peter and James raced the Senior Pairs as well coming second to Ned Williams and J. T. Butt!

The 1866 Ballarat Regatta was marred by the low level of the Lake and while James and John were entered Peter and Owen appear not to have taken part this year. The Cazalys were again in the winning Senior four-oared gig with Ned Williams and R. Bennett in a scratch race with the Geelong crew owing to the Alabama Club not starting having been disqualified for “wild steering”. It was found after the event that the tiller lines had broken on the Alabama boat and the poor coxswain had no hope of steering the boat.

Peter did not appear in any races for the Ballarat Rowing Club and as Lake Wendouree was completely dry in 1867 to 1869 not much rowing was done. In November 1870 the Ballarat City Rowing Club formed and Peter was listed on the organising committee for Ballarat Regatta. Two years later Cazaly was unanimously elected Captain of B.C.R.C. at a special meeting of the club in October 1872 following the resignation of inaugural Captain J. W. Graham. His brother John joined Peter at Ballarat City RC where he rowed 2 seat in the club’s Intercolonial crew in 1873. The crew was coached by Peter and stunned the rowing world by finishing a very close second to the winners, Melbourne Rowing Club. Interesting to note that Peter’s other brother James was in the winning crew!

Peter was Captain and coach for 13 years from 1872-1884. His contribution to the club saw him responsible for nearly all of the club’s early successes including 4 Grand Challenge Cups. He even wrote a guide to rowing for beginners. Unfortunately no copy of this still exists. Apparently he developed 6 easy and graduated lessons in the “proper principles of rowing” which he used to great effect at the club. He was ahead of his time in organisation and training. His sons, Peter Junior and William followed in the footsteps of their famous father and uncles by coxing many of City’s early crews. This included the crew that bought home the very first grand challenge cup from the Barwon Regatta of 1878. Peter resigned as Captain in October 1884. The family then left Ballarat and moved to Melbourne where he ended his day’s still teaching music but had nothing more to do with rowing.

He died on the 14th of July at Montrose aged 90 and is buried in the Lilydale Cemetery. Son Peter never married and died in Seddon in 1936 aged 72. 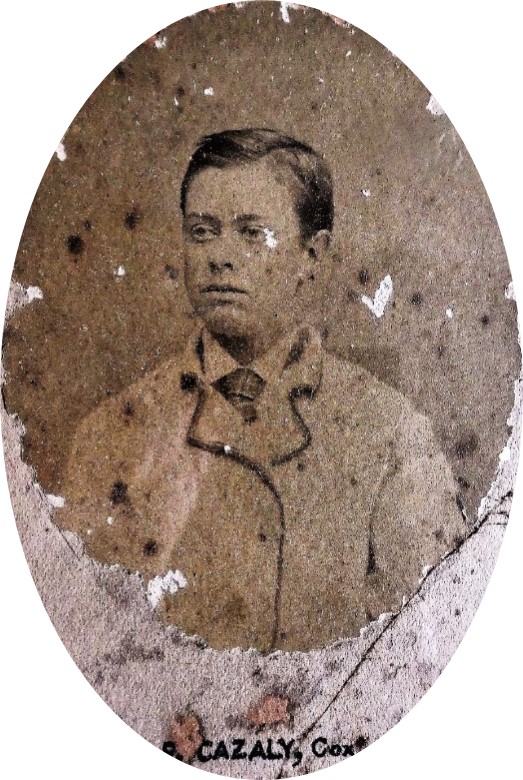 Photo of Peter Cazaly Junior, coxswain of 1878 crew that won