Michael came to rowing in Melbourne via club rowing despite being a student of Melbourne Grammar.

His family moved to Melbourne in 1961 as Michael's father started his first of two tours of duty as First Secretary to the American Ambassador. As an aside, Michael's father "worked for the FBI for 7 years and the CIA for 28 years.  He met my mother in Buenos Aires in the 1940's where he was assigned by the FBI undercover to find draft dodgers.  Mom was born in Brisbane Australia and moved to Argentina when her dad with Swift Meatpacking Company was reassigned there.  My older sister Cati was born in Santiago, Chile and I was born in Bilbao, Panama in 1950.  We lived in Falls Church, Virginia for two years, then we went to Havana, Cuba for 1954 to 1958, where Dad was Chief of Station for the CIA.  We left Havana in 1958 when Castro came into power.  We then went to Manila, Philippine for 1958 through 1961.  Dads next assignment was Melbourne, Australia for 1961-1966.  When we were there, one of his best friends was Brigadier General Sir Charles Spry, head of the Australian version of the CIA.  His cover was always as First Secretary of the American Embassy. In Miami, Dad worked at an undercover station called JMWAVE, out at the old Richmond Naval Air Station.  That group monitored what was going on in Cuba with Castro, and Dad worked with the Cuban refugee groups that ran raids into Cuba all the time.  I actually worked there part time in the summer or 1967, and year of 1968, helping microfilm their 201 records on everyone that they had interviewed or were monitoring. In the early 1970's, the newspapers ran a huge set of stories on JMWAVE and what was going on, mentioning everyone who worked there including Dad.  Since his cover was blown, he ended up retiring."

Michael started school at Melbourne Grammar school which he claims was "quite a change from American High Schools".

He adds: "At 11 years old, I was shorter and lighter than almost everyone else and stayed that way until I turned 16.  Therefore, I did not do well at Australian Rules Football, rugby, wrestling, etc.  I also had a loud, strong voice and was involved in lots of MCEGS concerts."

Michael started his rowing at Mercantile Rowing Club in about 1961 but did some with the school later on, "but did not want to compete against MRC".

He was successful in many inter and intra club regattas and won club awards for his coxing. These included coxing the A L Dobbie fours, coxing Tony Fox and Penry Green successfully in the lightweight pair at Nagambie and Yarrawonga, being awarded the most improved coxswain in 1964-65 season and the most successful coxswain trophy in 1966. 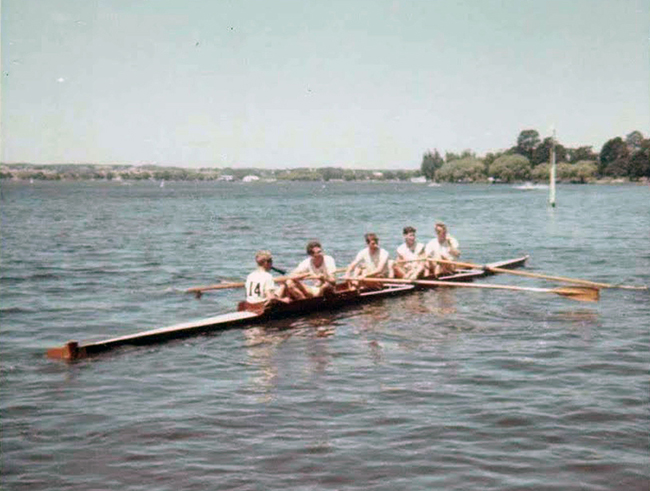 Michael coxing a Mercantile four at Ballarat in the mid 1960s

Michael then talked about his life after rowing. "We left Melbourne in 1966 so Dad could start his next tour of duty in Miami, Florida. I went to Coral Gables Senior High School for their second half of the year but could not get into to the senior year as I had not had American history which is a required course for graduation; so I was put into the second half of my junior year.  Even though I had been a C+ or B- student at MCEGS, I became an A+++ student and went straight into the Honor section at Gables High! Graduated in 1968 and went to Florida State University.  Had always wanted to go into medicine and be a doctor but after two years, decided that another 10 years of college was way too much."

Michael worked largely in the power industry in a variety of roles from establishing computer assets to buying fuel for electricity generators, and then to public administration, proving to be an excellent and fearless administrator. The last 16 years of his career through to his retirement in 2016 was working for the Miami Dade County. Michael describes this time in these terms: "In 2000, the county established the Office of the Inspector General to determine where the County's money was going. The county had ghost employees, employees stealing or misusing funds, contractors not doing work but getting paid for it, etc. I worked there as a Special Agent for 16 years, getting employees fired and/or jailed, pensions removed, contractors terminated and or jailed, etc. "

In response to "Why Mercantile?", he responded that "Mercantile was recommended to Dad by an Australian friend who was also probably a member of MRC".

Michael took some time to settle into the club. "From what I can recall, it took a while for me to get the hang of things and away from the novice and senior crews. I remember Head of the River, Mildura, Ballarat."

Why rowing? "Football, rugby, cricket were not fun for me.  Did play some tennis but not very good. I think that my weight and voice helped being a coxswain, and I enjoyed being around the boathouse with the guys and the other coxswains. Marty Owen and Simon Tulloh were very good friends of mine".

Club life memories? "I enjoyed being around the clubs, and going to places like Mildura and Ballarat. I could set my own schedule and did not have to inconvenience my parents with taking me places".

In terms of memorable races, the Head of the River and the country regattas of Mildura and Ballarat.

Michael returned to America and is now retired in Miami Florida.

Andrew Guerin
Compiled in June 2021 from discussions with Michael Caldwell