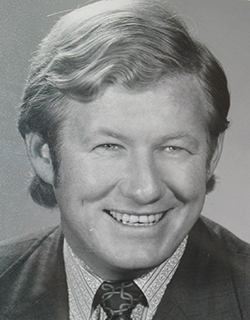 John Burford was an outstanding leader and coach of the Mercantile Rowing Club.

He started off his rowing at Brighton Grammar School before being recruited to Mercantile. His rowing and coaching career was as follows:

At times of need, John was always present. For example, when the Club had to be rebuilt in 1974, he took on the onerous role of Treasurer. When the club was floundering for success in 1971-72, he came back as Captain and turned the club around. Perhaps more than these things, he inspired others such as Martin Owen and Andrew Guerin to take on leadership roles.

He was also an inspiring and enthusiastic club coach who coached many crews including Australian Championships crews.

John Burford umpiring at the National Championships at Penrith in 1988

His legacy to the sport and Mercantile Rowing Club was profound.