John Anthony Brady was born in Mountshannon, East County Clare in southern Ireland to a Protestant family who moved to Melbourne to escape. His descendants advise that the family were quite well off when they arrived. Certainly they were well enough to send John to Scotch College, Melbourne.4

John took up the sport of rowing and has the distinction of stroking the 1868 Scotch College crew in the very first Head of the River race in Victoria - they won by one length.

The "Head of the River" is a classic event and stands as one of the premier events in Victorian rowing.

This boat race in Victoria was rowed on the Upper Yarra down stream on 18th June, 1868. The race was the outcome of negotiations between two Melbourne University Boat Club members, Mr. J. H. Thompson, on behalf of Melbourne Grammar School, and Mr. J. G. Johnstone, a member of the Scotch College staff. These gentlemen coached the respective crews. Crews had been rowing on the river for some time, but the challenge for the race issued by one of the Scotch College rowers was only made on 17th June. It was promptly accepted by Melbourne Grammar School, and even in those far-off days the contest aroused no little interest.

I am requested by the Scotch College Rowing Club to challenge you to a friendly four-oar gig race the race to be rowed on Thursday the 18th from the Botanical Bridge to Edwards' boat house, and subject to such conditions as the crews agree to.

I am, Yours truly,
JOHN C. FIELD

The result was a victory for Scotch College by a length. The names of the crews were as follows :

In the 150th anniversary history of Melbourne University Boat Club by Judith Buckrich6, the race was described as follows:

Grice began keeping a diary in May of 1869 in which his first entry was about rowing. He wrote of 'Scratch Fours' that were held on 29 May 1869. There were five crews and he rowed with Wilkie (stroke), Butler and Brady. He noted the results of the three heats of the race. Grice's crew won the final heat by a quarter of a length. He even noted that on 17 June, he walked to the engraver with Butler to get the pewter cup he had won. Through the winter months he rowed often in the afternoons and divided his days between study and rowing, which was very popular by this time. On 1 July he wrote:

"As soon as breakfast was finished I went down to the boathouse where there were a lot of fellows ready to pull in the Scratch fours. We got up 8 crews but if we had delayed making up the crews for ½ an hour we might easily have made 12." 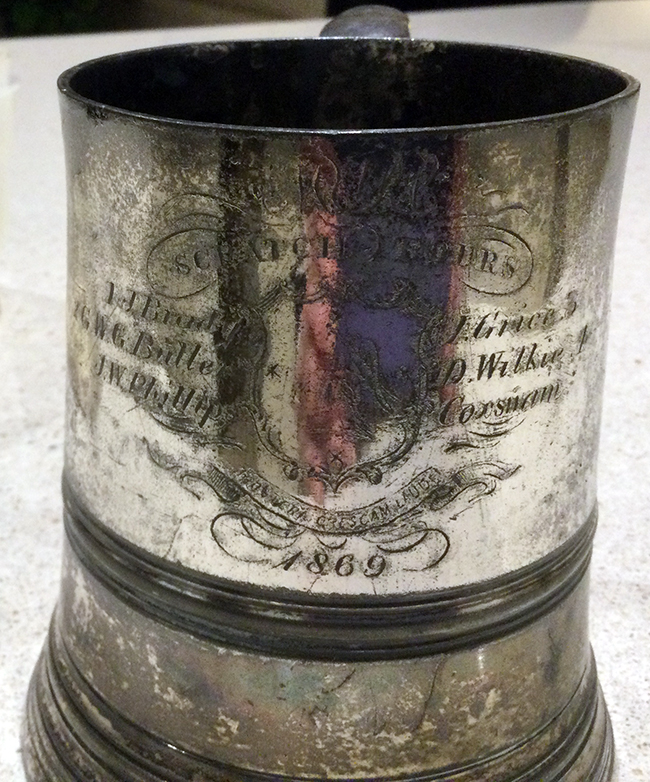 The crew seating differs from that described by Grice and that on the mug but that could the engraver starting from the wrong end of the boat.