An interview with Bob Bradley published in 1991 National Championships programme authored by MD.

What keeps a man interested in rowing at the age of sixty? For some it would be simply to keep fit, for others to continue the habits of a long-practised sport or simply the enjoyment of being out on the water. But at a time when most rowers have long since put their oars back on the rack, Bob Bradley is not only still rowing, but competing in regattas, and winning.

Bob Bradley sees rowing as a way of life, a philosophy almost. Rowing is a discipline which has taught him mastery over himself, given him control of himself physically and mentally, and brought him confidence. What is more, he has obviously enjoyed it. Today he is a great advertisement for his sport, looking years younger than he is, fit, relaxed and comfortable with himself. He is the perfect counter to the medical view that rowing is too strenuous a sport.

As a young apprentice with the railways in 1947, Bob was doing his own training by running in the Adelaide parklands. He was hoping to join a running club, but when someone mentioned that the S.A. Railways Institute was looking for new rowers he leapt at the opportunity. Thus began his rowing career.

At school he had enjoyed a range of sports, especially athletics, but the school did not have the money to support more than one or two grades in any sport. Unless you were an excellent footballer or cricketer, you got little encouragement. Weekend sport was also difficult, as Bob had to work Saturday mornings. Not physically large, he had some hopes of achieving success as a long distance runner, but rowing soon gained all his interest.

On joining the club he was immediately placed in a crew - 'There were no rowing machines then, so we went straight into tubs', he reports. The training of the day taught the 'straight back' style of rowing. This placed emphasis on style and appearance, and was not scientifically based. Rowers were taught 'to take it on the shoulders and the legs', and 'swing' into it. Weight and sheer physical endurance were relied on to win races. Training was based around time on the water and rowing 'flat out'. This approach did not change significantly for about twenty years, and as the eastern states began to discover a more scientific basis to rowing technique they were able to dominate the smaller states, such as South Australia, in major events like the King's Cup.

After a year or so rowing in novice fours, Bob began sculling. ‘I started to realize that if I was going to have a career in rowing I couldn't stay in crews. It still happens - if one person is missing you can't get out. At least today you can do some other form of training, such as rowing on a machine, but we had only running as an alternative.’

Bob did not start weight training until he was 30, and at the start of his career weighed only about 10½ stone (67 kg). This made it hard for him to compete with rowers in the 12, 13 or 14 stone category - the lightweight class had not yet been introduced.

The equipment did not make rowing easy, either. There were no epoxy resins, so everything, including oars, had to be tacked together with copper nails. The boat's shells were made from cedar veneer and were heavy in construction. A split in the shell would follow the grain and tend to run the whole length of the boat. The only way to end the split was to 'tingle' it. This required placing a sliver of veneer over the split, drilling a line of tiny holes either side pushing small copper nails through and gently turning them over to hold the sliver. It was then sealed with liberal coatings of varnish. The boats therefore gradually got heavier, and slower. They only had a working life of about 10 years. A regatta was a real trial. Going to Murray Bridge, or even just to Port Adelaide, meant putting the boat on a train, meeting it at the other end and then carrying it as much as a mile to the water!

Training when Bob began included heavy and light rowing sessions and running. The 'heavy' rowing nights might include eight 500 m sprints as hard as you could row, i.e. ‘110%’. At the top you rowed back lightly and then repeated the sprint. A light' night meant six 900 m sprints doing 10 heavy strokes, 10 light, 20 heavy, 20 light and so on. A running night might mean a 6 or 7 mile run.

At an early stage in his career Bob consulted a doctor about chronic tiredness. He was not only training as many nights a week as possible, but trying to complete his draughtsman's qualifications at night school and attend a couple of dances a week. The doctor told him to quit rowing - it was 'too strenuous a sport' - and to take up tennis. After a couple of miserable weeks Bob ignored the doctor and went back to rowing. He realized that he had just been pushing his body too hard and quickly learned to pace himself. Nowadays his training always includes proper periods of recuperation. He works in cycles of effort and active rest. Since then Bob has never had problems with health or injuries.

By carefully watching himself on 'up-and-downs’ waves of training, and paying attention to technique and speed work he has built up his confidence. 'I classified myself as fitter than anyone else on the water, and that fitness gave me confidence to be able to win races when the pressure was on’.

Bob has also maintained his versatility. Although primarily a sculler, he would always jump into a spare seat to row in a crew when the opportunity arose. His highest achievement in a crew came as a sit-in in a Junior Four Championship.

He believes in versatility. 'The crew aspect tends to spoil rowing. I think that in a club everyone should row in sculls or pairs, and train against each other. In a regatta everyone is also entered in eights and fours, and the sculls and pairs become their individual races. That is the key to success.

'Sculling helps rowing in every way. Mainly it helps 'in the head' - it's up to you to make things work. You can't sit it out like you can in a crew’.

When Bob bought his first scull - an old wood veneer boat that had to be rescued from the ceiling of the flooded Murray Bridge club house - it cost him a month's wages, about £30. Today he has two modern boats, though they are not particularly 'high-tech'. Although Bob thinks high-tech boats do give an advantage, he obviously believes very strongly in the ability of the rower him or herself. After all, he spent his first three years not only training, but competing, in the club's tub scull.

Bob has never been a great keeper of records – ‘I never thought that one day a record of all these races would come in handy, so I don't remember exactly’ - but he reckons to have about 9 sculling state titles in the open class, plus about 6 or 7 lightweight titles as well. Since he began competing in the veteran classes he has won 9 successive Australian titles, and also won the next younger age class. At the 1989 Australian Masters in Adelaide he achieved 7 gold, 1 silver and a bronze medal. At the inaugural World Masters at Toronto in 1985 he was placed fifth in the single sculls against international competitors.

Asked about the highlights of his career he recalls the Australian Championship he took out in 1979 with Rob Booth in the Lightweight Double Sculls. At the time he was 49. ‘We hadn't trained much together, but we had the same timing in the boat, the same length of stroke. When we pushed off from the bank Rob said 'What's our plan’. I said 'I don't know. I suppose we just do the best we can’· We started very quickly, looked around and saw everyone behind us. With every stroke we seemed to pull away. Half way through the race I started to worry: 'When are they going to come at us?' It was just a great race - we had the fitness and the timing’. Their record time of 5 min 37.5 sec still stands. 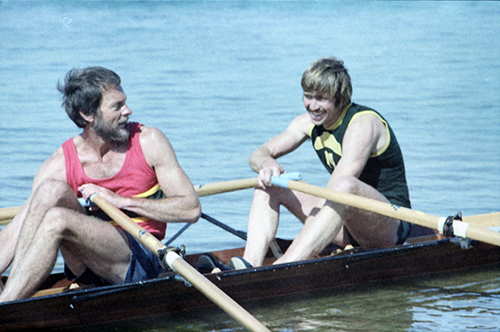 The next year he recalls that they got done·. But that has never worried Bob. He still maintains a vigorous training schedule - it cannot be called punishing because that is not the way he approaches training. For him rowing is not just brawn, nor just fitness alone - it is a total approach to producing the best from the human body on the water. This approach is obviously working because Bob is still winning races in his age class and the class above him i.e. younger and still putting in times that would make a young man proud. Nor does he see any need to stop - he just keeps on rowing!