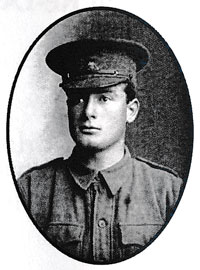 Bairnsdale born and bred Allan James Boyd was a 19 year old clerk when he signed up for service on 15 July 1915 with the 12th Reinforcements, 7th Battalion. He was in Egypt in early 1916 before being transferred to Marseilles. Just twenty days later Allan Boyd was reported missing.

In 1920 the family were advised that his body that been re-interred at Auber's Ridge British Cemetery, south west of Armentieres. Allan Boyd had just turned twenty years old when he died in what would be the worst 24 hours of battle - the Battle of Fromelles.