A dedicated, highly competent and understated member of the Australian rowing community. In every task undertaken, whether it be at a Club, State or National level, it was undertaken well and without fuss or fanfare. His engaging personality also made it delight to work with him on any rowing project.

His sense of humour knew no bounds. With his medical knowledge, he knew his prognosis for cancer in 2013 all too well. So whilst he could enjoy good company and good red wine, he held his own farewell at Hawthorn Rowing Club. It was a happy and hilarious afternoon with Denis presiding.

At Hawthorn Rowing Club, he was a past Captain and President and an important figure in the expansion of the Head of the Yarra into a national iconic event.

At Rowing Victoria, he was a Board Member, Medical Officer and Safety Officer. His work in developing excellent and workable safety standards for regattas is an ongoing legacy.

At the National level, he served as medical officer at National Championships, served on an Australian Championships organising committee and assisted national teams and team members.

At his funeral, his club saluted him with a guard of 16 oars. 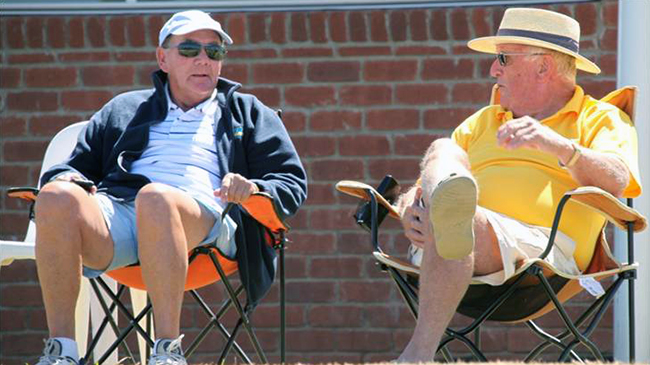 Denis on the right with David Deeble at the 2010 National Championships where he served on the organising committee.