There are some members of the Club who are legends and great role models in a very different way than our on-water champions. John is one of them. He is a champion of club life. He enjoyed his rowing, albeit not successfully, and excelled in enjoyment of Club life. He readily admits that he did not bother the judges too often but everyone in the Club appreciates his company.

His rowing career started at Geelong Grammar School in the 1950s and in his own words, "I reached a fairly ordinary level". The turning point came in year 12 when he was listed in the 13th crew at school and only five boys turned up to row an eight. So in 1957, his last year at school, he played basketball.

After leaving school, he joined Dalgety Limited, situated in Bourke Street, Melbourne. One day, the head of the department that John worked in called him into his office. He asked John what he did during the weekends. John told him that he went to watch the football at the Melbourne Cricket Club, where he was, and still is, a member. His response was that John should join a sporting club, rather than being a spectator and this would broaden his horizon, and he was to let him know what he planned. When John got home that evening, he told his father, who in his day rowed for Barwon, about this conversation and his immediate response was for John to join a rowing club, because he had rowed at school. His father said that he could get John into Mercantile with the support from Alex Dobbie and Jack Mounsey.

"Vic Sharp and then Bill Wallace were captains and made me welcome". John's rowing career turned out to be in maiden crews and occasionally lightweight. He comments in a humorous self-deprecating manner that "I think I held a dubious record of the most race starts without a win."

He looks back at the great service Dalgety and his father did for him in steering him to Mercantile.

The drought was broken in 1961 with a win in the J.G. Sprigg time trials of that year. He still treasure that trophy. He recounts that he recently came across Tony Wimble on Facebook, who reminded him that he was in a crew with me which won an event at Colac. Towards the end of his active career in 1964, he claims to have surprised everyone by winning the Guinn Pairs one Sunday morning with John Hayes in the stroke seat.

Over the years I he has kept up his membership and regular contact with Mercs. He also took on administrative roles including Hon Treasurer in the early sixties. More recent memories? Being taught to mix cement by Ted Sorani during the club rebuilding and, over subsequent years, attending many enjoyable Presidents’ Luncheons. His reflections - "I have made many life long friends at Mercantile and it has been a great experience. Long may this continue." 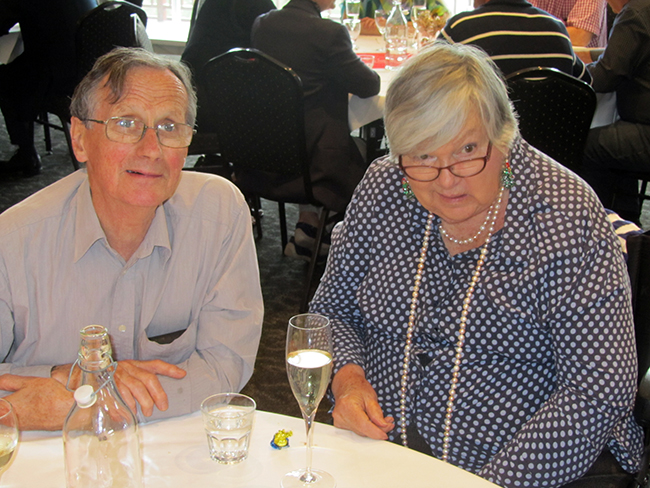 John and his wife Janet at a recent Christmas President's Luncheon