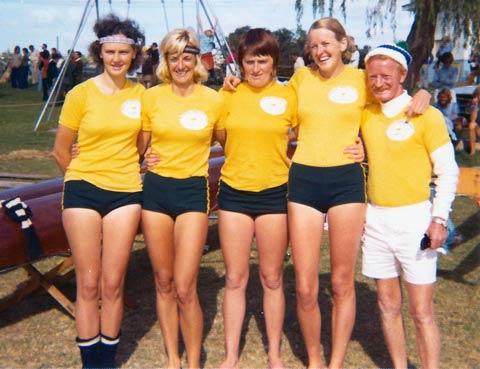 Val Bertrand (centre) in the Inter Dominion Australian Four in 1973

Val Bertrand has made an outstanding contribution to women's rowing in Victoria and in Warrnambool. Her rowing record is impressive, especially considering her size and being based outside Melbourne. Val was a school teacher at Warrnambool's Emmanuel College for many years and is now a sports administrator. She remains an active participant in several sports. A testament to her continuing good work is that a netball stadium in Warrnambool is named in her honour.

In March 1973 Val demonstrated her outstanding physical and mental endurance setting a new record for the Guinness Book of Records 100 mile single sculling record. She completed the distance in 21 hours 3 minutes. This was completed on her home turf on the Hopkins River Warrnambool. The after effects such as hands bereft of skin, caused considerable discomfort in that year in the Interstate Championships.

Her career finished in 1975 due to injury. However it was also apparent to her that due to her petite stature, she would have great difficulty competing successfully at the international level. She has held every administrative position in her club and remains an active coach and mentor. She has coached successfully at Victorian Championship and at the Head of the Schoolgirls including further Australian rowers such a Rebecca Watts.