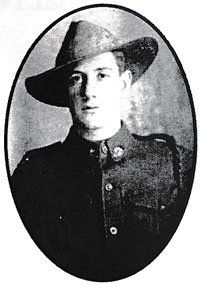 Bairnsdale born Milo Alexander Beaton had travelled to Liverpoool in New South Wales to enlist with the 13th Battalion at the end of 1914 where unknown to the local recruiters, he enlisted without any parental permission as a 21 year old.

At the time he was a dental assistant and just 17 years old. He sailed from Sydney in February 1915 and was treated for a septic hand in Malta in August.

In a letter home in November 1915 he said I think I had a pretty good run on the peninsula, I was there for over four months without getting a scratch. Out of the twelve men in our tent in Egypt my mate and I are the only ones left - the last of the gallant twelve. He then transferred to the 4th Pioneers on the 15 March 1916 and landed in France where he was killed in action in September and was buried near Pozieres.