Born in Geelong in 1860, son of Sexten and Eliza Baylee and died in Melbourne in 1910 aged only 50 years old. He was one of nine children. He was married to Alice but there is no reference to issue.

Whilst born in Geelong, it appears from his rowing record that Edmund grew up in Ballarat. His younger brothers, James and Cecil followed in his footsteps as Ballarat City coxswains.

He commenced his rowing career as a coxswain on Lake Wendouree before progressing to become a rower and key administrator in Ballarat.

His rowing record is not complete but we have ascertained the following:

1881 - Ballarat Regatta he stroked the maiden eight which finishing second. (Cox was a James Baylee.)

1881 - Ballarat Regatta he raced in a senior four which finished second.

1881 - Upper Yarra Regatta he raced in the bow seat of a winning senior four comprising J Byrne in 2, A Kortlang in 3, Arthur Gibbs in stroke and coxed by A Wright.

1884 - Mercantile Rowing Club Borax Soap scratch eights. The Mercantile Rowing Club history records that Messrs. Lewis and Whitty presented the club with a set of silver mounted crystal claret jugs as the prize for the Mercantile scratch eights. They were to be known as the Borax Soap trophies. The entry fee was a half crown per oar. The winning crew was stroked by Gowdie of Albert Park. Although there were 174 entries, only £20 was raised for the club. 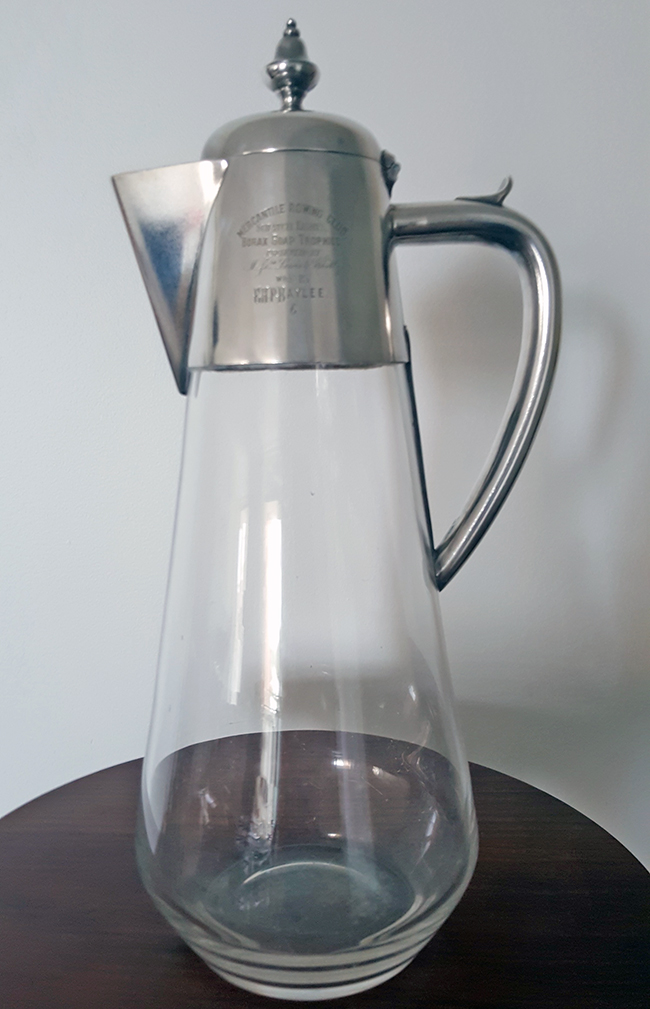 In one newspaper cutting,  a contest between  Ballarat City and Ballarat Clubs was described with the final between Baylee and Whitelaw’s Crews with ‘Baylee’s lively stroke winning the day’. In another competition at Wendouree where Hogan’s finally beat Baylee’s by a ‘bare length….one of the finest races ever rowed on the Lake’.

Edmund was secretary of the Ballarat City Rowing Club in the seasons 1878-79, 1879-80 and 1880-81 under the well known Captain Peter Cazaly and equally well known President H R Caselli. Edmund was also a member of the organising committee of the Ballarat Regatta in 1881.

Edmund was a banker by profession and in 1881 his employer, the National Bank, posted him to start an agency at Cope Cope, near Donald in the Wimmera. In those days, the National Bank dominated rural banking and established branches and agencies throughout Victoria.

A lengthy newspaper report of the time records Edmund’s departure from Ballarat on 20 December 1881. The report notes his good work as secretary of the club and captain Peter Cazaly is reported as saying ‘a more energetic club secretary a club never had’. President Caselli added that Baylee had entered the club as coxswain, had won many honours, the most recent being the City Senior four in Melbourne. The club presented him with a gold Albert and locket as a farewell gesture.

At some later stage, he established his own business Baylee & Co in Melbourne as an auctioneer during the heady real estate boom of the 1880s. Sadly the boom was followed by a major crash commencing in 1891 and his business went under. He was left holding too much depreciating real estate with high mortgages. In March 1892 he was made insolvent and in December 1892, he reach a Court approved settlement and was released from his insolvency. He went back into auctioneering with he and his business mentioned in the papers regularly thereafter and his obituary noting that he was a well known Melbourne auctioneer.