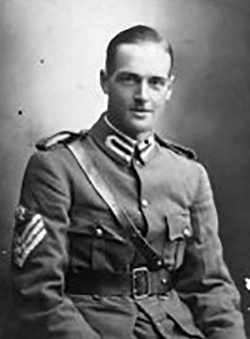 Known as Ralph, Andrew Ernest Ralph Barnfather was born on 6 August 1891 in Geelong, the youngest son of nine children. When he enlisted he was 23 years old, 5' 8”, 10 st., with brown hair and hazel eyes. He had attended Geelong College and was a carpenter with John Robertson and Sons of Lt. Ryrie St. He had seen previous service with the 29th (Port Phillip) Light Horse Regiment as a Sergeant Major.

His brother Stanley had rowed with Barwon in 1906 and was Secretary of the Club. Ralph had joined Barwon Rowing Club by 1910. He rowed bow seat in the winning Maiden Eight at the Ballarat Regatta of 1914.

He enlisted on 18 August 1914 as Staff Sgt-Major in the 4th Light Horse, A Squadron. Prior to his embarkation on 19 October 1914 he rowed with William Allen and Charles Storrer in the Light Horse winning eight at an inter-regimental regatta on the Yarra River.

After serving on Gallipoli without injury or illness he was promoted Lieutenant on 23 March 1916 upon transferring to the 58th Battalion. Whilst in Egypt he again rowed with Charles Storrer in a winning inter-regimental eight.

Arriving in France on 23 June 1916 he qualified as a machine gun officer, returning to his battalion on 17 July. The 58th saw its first major battle on the Western Front at Fromelles on 19 July. They had the dual role of providing carrying parties and acting as a reserve force. This reserve force was ordered to attack late in the battle and was virtually annihilated by machine gun fire. As a whole the 58th suffered casualties equal to almost a third of its strength with six officers wounded and four missing, and 27 OR's killed, 161 wounded and 49 missing. By 8 a.m. on the following day the battle was over; the 5th Australian Division sustained 5533 casualties in just 24 hours.

Ralph was one of those officers reported as missing. In his Red Cross Wounded and Missing file an informant from Geelong stated that on July 20th 1916 at Fleurbaix, south of Armientieres, 2nd Lieut. Barnfather he believes was killed in action. Lieut. Barnfather went out as one of the leaders in an attack on German trenches. They got into the trenches, but he is sure no English prisoners were taken. Another informant stated that Lieut. Barnfather fell shortly after we got over … body seen but not recovered. This was at Fromelles. Said to be shot through the throat.

A court of enquiry on 6 August 1916 (his birthday) determined that Ralph had been killed in action on 19 July, the same day as fellow Barwon member James Reid. He has no known grave and is still listed as one of the missing from Fromelles.

The family inserted the following death notice in the Geelong Advertiser in May 1917:
He died the noblest death a man can die, Fighting for God and Right and Liberty;
Such a death is immortality”.