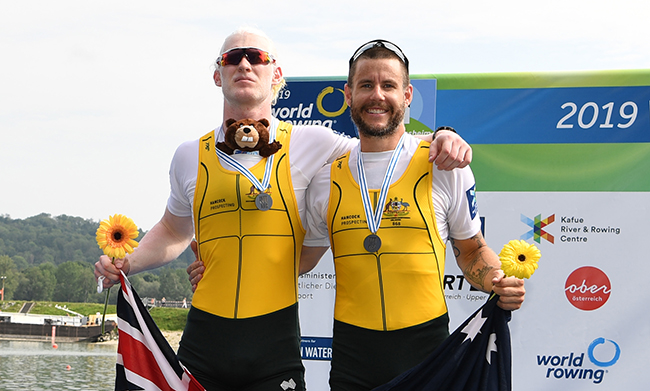 2019 World Championships - Will Smith on the left and Jed Altschwager on the right
Photo: Copyright Rowing Australia

His Rowing Australia athlete profile taken from the website on 11th May 2020 states:

In 2018, Jed Altschwager made his debut for the Australian Rowing Team in the PR3 Men's Pair at the 2018 World Rowing Championships. Altschwager went on to win a silver medal in the boat class with James Talbot. In 2019, Altschwager will partner with fellow South Australian, Will Smith, in the same boat class. The South Australian lost his leg in 2015 after an accident with an excavator at work. Jed himself describes it as 'his foot was squished and taken off' and post rehabilitation the Adelaide-local identified strongly with the sport of rowing. Based out of the South Australian Sports Institute, under the guidance of Head Coach Jason Lane, Altschwager went on to win a silver medal in the PR3 Men's Single Scull at the 2018 Australian National Championships. Altschwager loves being on the water and feels rowing is the perfect fit for him, and within a few months of taking it up he really started to like and enjoy the sport as he feels 'it's hard and requires 100 percent of your energy.'. Outside of rowing, Altschwager has the opportunity to tell his story to local schools in South Australia, spends time with his young family says West Lakes in South Australia is his favourite place to row. His favourite song to listen to before a race is Move forward. Dr Piffle and The Burlap Band.