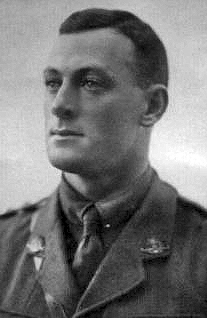 William Robert Allen was born on December 8, 1892 in Kingston, near Ballarat to Dr. William Allen, honorary consultant at the nearby Creswick Hospital, and Maria Parkin. His father died on the 30th December, just three weeks after his birth. William was educated at Geelong Grammar School, and was a fine oarsman, rowing No. 7 in the Grammar School Eight in 1910 and 1911. Trained as an engineer, he worked as a clerk at Strachan, Murray and Shannon's wool store in Geelong. William had joined Barwon Rowing Club by 1914.

On 11 September he and his 37 year old uncle, Captain John Parkin and three other local boys were farewelled at a packed Creswick Mechanics' Hall, decorated with Union Jacks and wattle blossom.

Each of the volunteers were presented with a case of pipes suitably inscribed, to enjoy after a hard day's battle, and were called upon to respond to the large crowd.

Trooper Bob, as he was now known, said: it was very hard for a young fellow to face all his friends, and make a response, nevertheless, he thanked them for the nice presentation, which he had not expected. He appreciated the good wishes, and it would give him greater courage and ambition, knowing the people he lived amongst supported him. The joining of hands and the singing of "Auld Lang Syne" and the National Anthem brought an enjoyable evening to a close.

The 4th Light Horse were not sent to Gallipoli with the first landing. However infantry casualties were so severe it was decided to send them, without their horses, as infantry reinforcements. They landed at Anzac Cove between 22 and 24 May 1915. It was at Ryrie's Post in August that William received shrapnel wounds to the left hand and foot and was later evacuated to hospital in Malta with septic wounds. He rejoined his unit on 25 October 1915 and left Gallipoli when the peninsula was evacuated in December. With the re-organization of the A.I.F. after withdrawing from Gallipoli, he transferred to the 57th Battalion, arrived in France in June 1915, saw action at Fromelles and was promoted Lieutenant in August 1916.

Throughout the winter of 1916–17 the 57th Battalion kept pressure on the Germans by means of small attacks and raids. The Unit Diary of the 57th Battalion on 1 February 1917 records: Front Line near Guedecourt. The trenches were cleared by dawn in anticipation of a Heavy Artillery Stunt between 1.30 and 2 pm. During the night our trenches and the whole area were heavily shelled. 2 OR's killed, 5 OR's wounded. During the morning Lieutenant W R Allen was sniped through the head and killed. William was killed in Shine Trench, in front of Guedecourt.

Quite a gloom was cast over the town on Thursday when it was announced that Lieutenant W.R. Allen had made the supreme sacrifice for his country in France. He was a good sport and a real good fellow in every way. Very great regret is felt for Mrs. Allen at the loss of her only son, and deep sympathy expressed for her and Captains T. and J. Parkin. All the flags were flying at half mast on Thursday. Bob was the fourth of the five who were farewelled at the Mechanics Hall to be killed.

Later Private Allan Falla, of Kingston, wrote to his mother with the details: I was telling you about Lieutenant Allen who was in our Company, who got killed. You can tell his mother if you ever see her that he has a very nice grave and cross erected over him. The boys thought the world of him. They carried him five miles from where he was shot to bury him in a cemetery. We were just changing over with another battalion, and he was showing the incoming officer the different posts when a sniper got him right through the head.

On his tombstone is written He answered his country's call.