The Mosman Centenary history (details below) provided the following interesting story on Graeme.

Stu's brother Bruce was in the year below them. The Evans family had a produce store at Belmore, and the boys had told Mick their father had been a pretty good rower.

'I knew there were two Evans brothers in this Famous Eight,' says Mick, referring to the all-Mosman King's Cup winning crew of 1929. 'I was mates with Stu, so when the family moved across to North Balgowlah, I used to go and see him and stay there.'

It was 1953, and with the help of Stuart's father Fred, the boys began to row all around that part of Sydney Harbour in a tub pair, visiting beaches and generally looking for mischief.

'At first we were just mucking about, and just rowed around the harbour but then Fred began to coach us.'

At first Fred would coach and cox two of the boys in a tub pair, while the other waited for a turn. He found a Bondi boy􀁐John Holmes-and moved them into a four. They won all the races in the 1954 Cock o' the Harbour series. The boys went from novice to maiden, winning everything, and then Fred moved them into a maiden eight with some newer boys, with Bruce Evans at stroke, Mick in 7, Stuart in 6 and John in the 5 seat. They won all the races through that autumn of 1955, beating school and club eights.

When giants Kevin Evans and Ken Railton came to Mosman from Collaroy in the winter of 1956, they had never rowed, but the intensive training in the tub pair with Fred worked the magic. They had never raced a four or rated over 24, but Fred put them in the bow of a four with Mick and Bruce. The stern pair harnessed the might in the bow, and in December 1956 they ran away with the NSW Championship.

In October 1957 trials were held for the NSW crew Lo contest the 1958 Empire Garnes. Mick was select­ed, along with Ken Railton and Kevin Evans. They won the test race over the Victorians, who had boated the majority of the 1956 Olympic eight. The eight was split into fours, and NSW defeated Victoria in both races.

Mick turned 20 in Wales. It was his first trip overseas, and quite an incredible journey. The Empire Games team flew from Sydney to Fiji, to Hawaii, to San Francisco, to New York and then London. The day after arriving, they won at the Marlow Regatta in a borrowed boat. At the Games Mick remembers being very competitive against the Canadian silver medallists from the Melbourne Olympics, going clown by half a canvas and seeing the finishing stand get swamped by wild weather on Lake Padarn.

After rowing in the winning NSW King's Cup crew in 1959, Mick was in the following year's Mosman eight that swept all before it for the NSW Championship. On they went as the state's King's Cup crew, with eyes firmly on the Olympics. But then the famous 'banana boat' debacle on Tasmania's Tamar River derailed all that. Mick was still selected in the coxed four for the Rome Olympics.

We thought we had some show in '60,' he recalls. 'We made it into the final, but still didn't know much about the rest of the world. Your first time up there, with no competition leading up to it was very hard.'

Lack of regular exposure to the world's best meant that Australian rowing was literally being left behind.

We needed to get out and get amongst it, or we'd be left for dead,' says Mick.

Mick was in the engine room of the second-placed NSW crew for the 1961 King's Cup. It was a time of change, when coaches tended to try anything. George Towns's 'banana boat' was 64 feet long, and according to Mick it was 'like rowing a tree log, but it had no life'.

Then there were Dr. Eric Langley's 'hockey stick' oars. 'They were like cleaver oars, but bent at the end,' remembers Mick. 'They were very hard to perfect because they'd either dive down into the water, or come out of it.'

At the end of 1961, Mick's best mate Stuart Evans lost his arm in a car accident. The 'Novice 3' would never row together again, and the accident affected everyone who rowed with Stuart. Mick remembers his mate as brave and incredibly resourceful, despite his disability.

'He did simply amazing things with one arm,' says Mick, 'and he never lost his profound love of the sport.'

As a carpenter for Kell & Rigby, Mick found getting from his job to training very hard-sometimes arriving home very late at night. In 1962, he shifted from Mosman to Sydney Rowing Club, and his wonderful career continued, rowing in the King's Cups of 1963 and 1964, and then selected for the Tokyo Olympics. But again Australian rowing was behind the eight ball.

'All the crews realised we were lacking in competition and equipment. We rowed as well in the test races as we did in the Games. I don't think we improved much.' Mick's coxed four was tenth.

Mick is astonished at how rowing has changed. 'At the Olympics there were only seven races, and it was men only. Regattas had 10 races. There were no lightweights, Masters or sculling. Going back, no one was interested in sculling-it was all sweep oar, all crews and coxed.'

In retirement Mick Allan gives back, going to the Sydney shed every week to use his knowledge and tradesman's skills to repair and maintain boats. But he began at Mosman, and the club will always be grateful he listened when his mate Stuey said 'Mick, come rowing!' 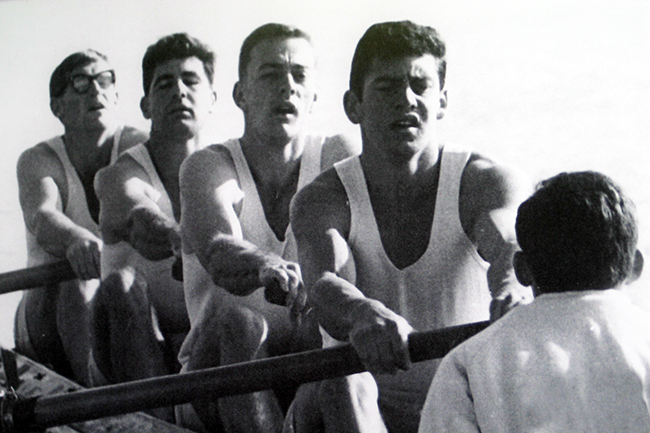 1964 Sydney Coxed Four which went to the Olympic Games

Mick maintained a strong interest in rowing and in particular Sydney Rowing Club throughout his life.