This trophy is currently a lost trophy of the sport. 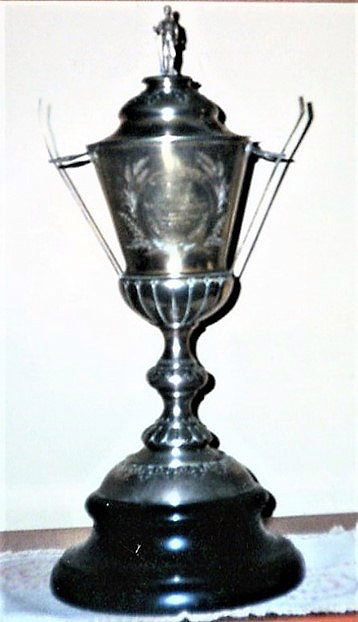 Trophy is elaborately engraved on the lid, stem and base and on both sides. Fitted onto a black wooden base, it stands 57cm from base to the top of the rower's head. The handles of trophy are rowing oars, held by silver rope. On the lid stands a rower holding an oar, at attention.

On the silver base inscribed:-

John Lang in his book The Victorian Oarsman published in 1919, records: The Claymore Challenge Trophy for Champion Eights was finally won by the Yarra Yarra R. C.

The story gets complicated as later, he goes on to state that: 18th April 1891. This Yarra Yarra crew [referring to the 1891 winning Champion Eight] received the Armfield Challenge Cup and the first Premiership Pennant, the gift of Mt G. E. Upward. The same crew won the Lorne Whisky Trophy on 14th March 1891, afterwards called the Claymore Trophy; Wendouree 2nd; Civil Service 3rd.

The story continues later in Lang's book noting that the trophy was founded in 1891 and won twice by Yarra Yarra RC on 4th March 1891 and 12th December 1891.

It therefore appears that it was not presented to the winning Champion Eights of the day, but perhaps to the winning senior eight at another regatta. Perhaps when the trophy is found, more will become apparent.

The trophy was brought to our attention by Jim Skidmore of the Yarra Yarra Rowing Club (VIC). We are most grateful for his assistance.