The original King's Cup at the Henley Peace Regatta

The story of the winning of the King's Cup at the 1919 Henley Peace Regatta is a legend in Australian and World rowing. A significant centenary commemoration of the event was conducted at the Henley Royal Regatta in 2019.

The medallions are gilded silver and made by Goldsmiths and Silversmiths Co Ltd of London. Whilst the hallmarks are not entirely distinct, the date would have been 1919. Given that the regatta was only conceived in February 1919 and the cup donated in March 1919, this seems certain. The medal on display comes from the Andrew Guerin collection and is the medal won by the four man, Arthur Scott. 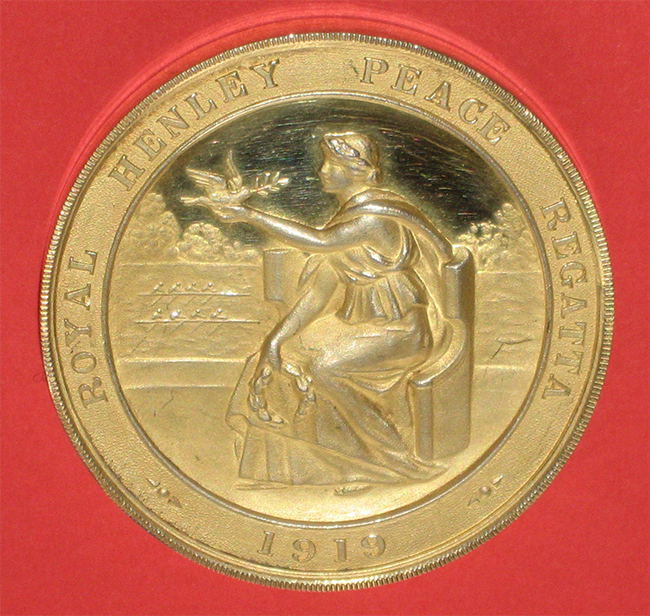 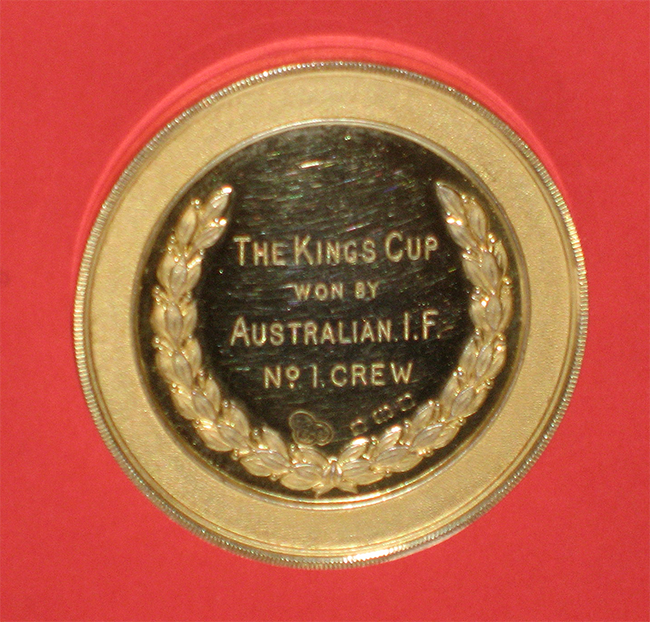 From 1921 crews have competed for the King's Cup Trophy.

First won in 1919 at the Henley-on-Thames Regatta held on 2nd to 4th July of that year, this handsome trophy, a substitution for the Grand Challenge Cup race for that year, was presented by His Majesty King George V to the successful AIF No 1 crew which, along with seven others, contested the eight-oared race for competition between crews from the armies of the Allies in the 1914 -18 War.

defeated the AIF No 2 crew in the first heat, Cambridge University in the semi-final and Oxford University in the final by a margin of one length in a time of 7 minutes 7 seconds, the other competitors being Canada, France, New Zealand and United States

The second refusal precipitated further action by the Victorian Rowing Association, and a petition to the King prepared by it dated 30th October 1920, and signed by Captain H C Disher, was sent to his Majesty with the request that he make known his wishes with regard to the disposal of the trophy.

A reply dated 13th May 1921 received from the Secretary of State for the Colonies, Mr Winston Churchill, stated that, 'His Majesty commands me to inform you that it is his wish that the Cup should be used as a permanent trophy and be competed for annually in the Interstate Eight-oared Race of Australia'."