In 1958, the Rowing Club, which had recently been revived, was in desperate need of funds. At the General Meeting in 1957, the Secretary announced that there was £28 ($56) in the bank. The Club did have an almost new Racing 8 and set of oars, but the rest of the equipment was largely pre-WW2. The members did get out and earn some money from various sources, but it was nowhere near enough for the Club to be a competitive force in Rowing.

To understand why the Dance became so successful, the social scene in Melbourne during the fifties has to be remembered. Hotels shut at 6.00 pm on Saturday night, and remained closed until Monday. There were no night clubs, and most dances were held in Town Halls, where the dress code was suit and tie for men and best frock for the ladies. The music was dance band style, with waltzes and fox-trots predominating. It was a police offence to consume alcohol in cars within a quarter mile of premises where dances were being held. LSC&PH was still running an old-style dance on Saturday nights at the Club House on Albert Park Lake, bur this was declining in popularity, and as a result revenue was dropping.

During the mid-fifties, the local jazz scene was becoming more popular, and some “informal” dances were started, the most successful being at 431 St. Kilda Road, not far from Power House. Their dress code was“neat casual”, and the dancing style was influenced by American programs on the newly-introduced television sets. However, their venue was scheduled for re-development and the organisers announced that the dance would be closing down.

Max O’Brien and Ken Dowdney recognised that this was an opportunity for the Rowing Club. Six of the members put a proposal to the LSC&PH Council that they would run an informal dance on Sunday nights and that the Club would share the proceeds equally with the parent body. The delegation included Bill Raper, Max O’Brien, Ken Dowdney, Mike Pointer, Tony Mollard and Jim Petty. The Council was asked to provide £200 ($400) working capital, for which the delegates provided personal guarantees on repayment.

The Council, of which Phil Rhoden was then Camp Chief, agreed but not without some misgivings about dancing on Sundays, and possible adverse effect upon the Saturday night dance. Bill Raper had foreseen the objection about Sunday, and had cleared the idea with Canon Wilson, the Chaplain to LSC&PH, prior to the Council meeting.

After being given the go-ahead, there was much frantic activity to organise the dance and to get as much publicity as possible. It was Bill Raper who introduced Kenn Jones to form and lead the band. Ken Dowdney organised teams to visit as many as possible of the similar dances to leave leaflets on windscreens. Mike Pointer took on the role of treasurer. Other members distributed leaflets with free passes to places such as the Nurses’ Homes at the big hospitals.

The Dance opened in June 1958. For the first few months, its future was uncertain, with attendances hovering around two to three hundred. Then suddenly it took off, with a crowd of around 700 on one weekend, and from then it never looked back. It became the most popular Sunday night dance, and on some nights, the doors had to be closed after 1,000 people were in the hall.

One reason for the popularity was the venue in the old clubhouse, which suited the style of dance. Patrons entered through a staircase underneath the bandstand, which was about 3 metres above the dance floor. This was superb for seeing the band and for hearing the music, and also offered a great view of the notable guest artists who started appearing regularly. Among these were the Seekers (prior to them going to England), Dave Allen, Tommy Hanlon, Helen Reddy and Lana Cantrell, along with many overseas performers who were brought out here for TV appearances.

The person responsible for getting performers of this standard was Graeme Smith, who was a friend of Max O’Brien and had very good connections with the local entertainment industry. His work was entirely voluntary, as was that of all the members, wives and girlfriends who manned the door, took the money, swept the floors afterwards and generally kept the place running as well as it did. Graeme continued to lead the Dance Committee for 9 years and ensured that the format was constantly refreshed so that it remained the leading Dance in Melbourne. 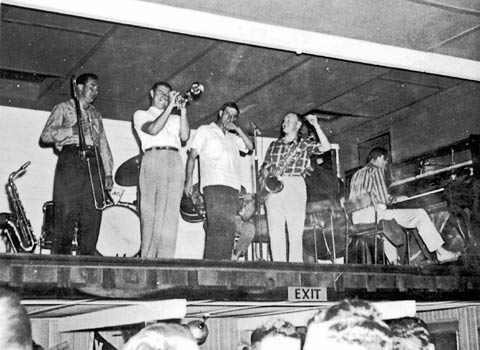 Perhaps crowd control was easier in those days as alcohol was not so readily available. There were occasional problems at the door, but there were always enough Club members around to manage the situation. The practice of ensuring that all males attending were enrolled as social members (five shillings per year) helped keep up the standard of behaviour.

In 1964, LSC&PH commenced to rebuild the premises to comply with the direction from the Albert Park Lake Committee that all structures must be clad in brick. The Dance Committee had to contend with the building work in progress and when this was finished, there were challenges in adjusting to a new hall which was much larger but lacked the character of the old one. They responded with innovations such as running two bands for non-stop music, by creating more atmosphere in the hall, and by ensuring that patrons received good value by featuring more notable guest artists. These included names such as Barry Crocker, Lucky Starr, The Delltones, Bill and Boyd, and Toni Lamond.

A measure of their success was that in June 1965, there was a new record crowd of 1628 paying patrons.

In 1967, Graeme Smith retired as Dance Committee Chairman and Paul Dean was appointed to the position in which he continued for six years. During his time, he guided the Dance to new heights of popularity and success.

The Committee decided to continue with the policy of presenting quality guest artists and to increase promotion of the dance. Previously promotion had mainly been by leaflet and it was decided to commence advertising on radio. Radio station 3AW became the main media promoter and the Dance was advertised on the Norman Banks morning talk back show.

Norman Banks was highly respected by “Mums and Dads” and the Committee hoped he would have a positive influence in parents allowing their daughters to attend the Sunday Night Dance. He did visit one night and from then onwards he spoke enthusiastically about the Dance and the manner in which the Club members managed the whole evening.

Around this time it was decided to change the format by replacing the Kenn Jones Jazz Band with a Big Band led by Alan Eaton. This change immediately differentiated us from the other dances as we had the largest band (17 – 18 members) and the newest sound in Australia. Average attendance soon reached 1600 per night.

Other LSC&PH Clubs decided that the Rowing Club should not have all of the success and the Rugby Club commenced a Saturday night dance and shortly thereafter the Aqua club opened a Thursday night dance. Not content with copying the format, they also engaged the Alan Eaton Big Band.

There were initial concerns that their grab for a “slice of the action” would result in diminished attendances but these fears were unfounded as continual promotion and engagement of guest artists saw numbers grow to such an extent that Sunday Night regularly had attendances over 2000 and the highest ever attendance was around 2700.

It is fair to say that the amount of money raised by the Rowing Club exceeded the original expectations, when funds were needed for new boats and oars. However, during the sixties, rowing conditions on Albert Park Lake deteriorated seriously due to growth of reeds. It became obvious that the Club had to move to the Yarra in order to develop as a Rowing Club, and the funds raised by the dance provided the wherewithal to build the present boat-house which was opened in 1970.

The Rowing Club had always managed the Dance from its own resources, but shared the proceeds equally with LSC&PH. The finances of the parent body were unsound. In 1972, their subscription income was $2,901, and revenue from the dances was $32,487, for a total of $35,388. Their expenditure was $38,288.

The LSC&PH council requested an increase of the percentage paid to them. The Rowing Club Committee resisted this increase, and so the Council set up a Joint Dance Committee which they directed would operate the 3 dances under their control.

The Rowing Club Committee understood that the Club would continue to receive income from the Dance in return for participating in its operation, along with two other Clubs who were assigned to Sunday Night by the Council. While some payments were received in 1973 and 1974, after this, no more money was provided to the Rowing Club.

As regards the operation of the dances, the Camp Chief, Bill King, and the Council of LSC&PH were highly critical that “such a significant amount of funds were expended on guest artists and advertising” and decided that the dances would continue to be successful with a reduction of promotional spending and without the direct involvement of the clubs.

This decision proved to be the beginning of the end of popular support for the dances. Also, the lack of funding for the Club made it increasingly difficult to persuade members to staff the dance because there was no longer any direct income from its operation.

The desire of the Council of LSC&PH to gain every $ possible from the dances resulted in their demise and the last dance was held in August 1977. It was a sad end to an activity which not only provided the funds to establish the Rowing Club in its new location, but also served the entertainment needs of the young people of Melbourne.

There was a concerning footnote to this episode. In 1978 a new Camp Chief (Gordon Trinca) was appointed, and made the following comments in the July edition of the LSC&PH Journal:

“The closing down of the dances had a devastating effect on income…..”

*It must be obvious that but for the income obtained from the H.S.C. lectures serious consideration would have had to be given to realising some of our assets such as Gully Lodge at Eppalock, the Rowing Club and the playing field at Camp. Council, in its wisdom and in order to prepare for the worst entered into negotiations for the sale of these facilities. I am happy to report that at this time there appears to be no likelihood of such action being taken, certainly not during my tenure of office as Camp Chief.”